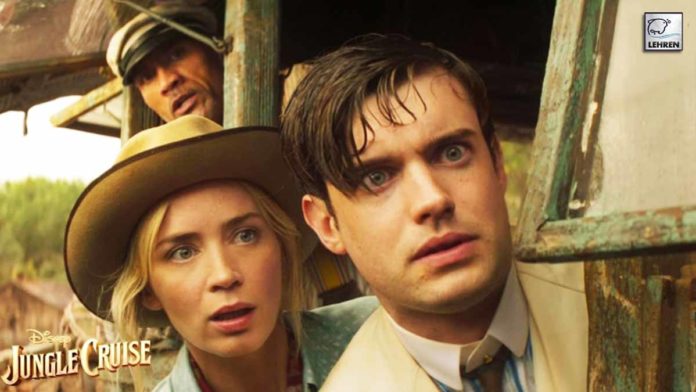 Disney’s adventure film Jungle Cruise has found a window of release in Indian theatre on September 24. The action-packed movie stars Dwayne Johnson and Emily Blunt. The movie also stars Jaume Collet-Serra, Edgar Ramírez, Jack Whitehall, Jesse Plemons, and Paul Giamatti. The film will have a theatrical release across the country in English, Hindi, Tamil, and Telugu.

Directed by Jaume Collet-Serra’s, the movie is based on a theme park by the same name. Jungle Cruise has already been released internationally on 30 July. The movie had a hybrid release on July 30 in American theatres as well as on Disney + with an extra price. The movie is filled with adventure and inspired by the famous Disneyland theme park ride. The audience will get the exciting experience of rollicking thrill-ride down the Amazon with wisecracking skipper Frank Wolff and intrepid researcher Dr. Lily Houghton.

The official synopsis of Jungle Cruise reads – “Based on Disneyland’s theme park ride where a small riverboat takes a group of travelers through a jungle filled with dangerous animals and reptiles but with a supernatural element.” Disney is bringing another ride-based movie, after the success of its Pirates of the Caribbean movie series. The Jungle Cruise ride is even older than the Pirates ride. It was the only attraction to exist in Adventureland on Disneyland’s in 1955.

The movie, which was in development for more than 15 years before finally making its way to the theatres, features a boat ride through a man-made jungle. Based on the popular Disneyland attraction, the Jungle Cruise will take the audience on an adventure led by a skipper who follows a pun-filled script. The tour will take you through wild animals includes crocodiles, piranhas, monkeys, elephants, rhinos, cannibals, and hippos. The adventure also includes the infamous backside of the water, the eighth wonder of the world.

After its huge success in American theatres, Disney has already started working on its sequel. According to the reports, both Johnson and Blunt will be reprising their respective roles in the sequel of Jungle Cruise. Emily Blunt played the role of explorer Dr. Lily Houghton while the Rock was seen as Captain Frank Wolff.

The screenplay is written by Michael Green (Logan), Glenn Ficarra, and John Requa (Focus). However, Jungle Cruise is produced by Johnson alongside John Davis, John Fox, Beau Flynn, Dany Garcia, and Hiram Garcia. While Scott Sheldon and Doug Merrifield were served as executive producers. The movie is a production of Walt Disney Pictures, Davis Entertainment, Seven Bucks Productions, and Flynn Picture Company. The Disney movie was made on an estimated budget of about Rs. 1,485 crores.