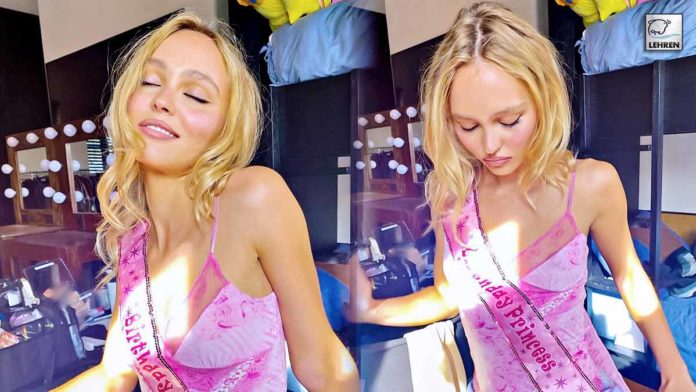 Lily-Rose Depp recently starred in movies like Wolf, Voyagers and Silent Night, and she's currently working on The Weeknd's upcoming series The Idol.

Lily-Rose Depp recently turned 23 and the actress and model, who is the daughter of Johnny Depp and his ex Vanessa Paradis, shared a glimpse of her special day on social media. Lily-Rose shared three beautiful snaps on her Instagram feed, including one of a bouquet of flowers and two photos of her wearing a cheerful pink sash that reads “Birthday Princess.”

The actress recently starred in movies like Wolf, Voyagers and Silent Night, and she’s currently working on The Weeknd’s upcoming series The Idol. Back in April 2021, Lily-Rose told Entertainment Tonight whether she and Depp hoped to share the screen for a movie someday soon. “I think never say never. That’s really not something that I consider first and foremost; what’s interesting to me is a particular character that I may or may not be playing and the story that it’s telling,” she said at the time. “But yeah, I love to work with great actors.”

Lily-Rose’s birthday on Friday came as Depp and ex-wife Amber Heard’s lawyers made their closing arguments in the defamation trial that kicked off April 11. Johnny Depp vs Amber Heard case verdict is expected soon. A seven-person jury began deliberating Friday afternoon. Depp is suing Heard for defamation over a December 2018 op-ed the Aquaman actress wrote about coming forward with domestic-abuse claims. He’s seeking $50 million in damages, claiming it stifled his career prospects.

Heard is countersuing for defamation, claiming that public statements made by Depp’s lawyer Adam Waldman that called her allegations “fake” and an “abuse hoax” ruined her reputation and halted her career. Depp and Heard married in February 2015 during an intimate celebration on his private island in the Bahamas. While on the stand last month, Depp recalled that Lily-Rose, the older of his two kids, skipped the nuptials, which had about 20 to 25 people in attendance, according to Depp.

The Pirates Of The Caribbean star said, “My daughter Lily-Rose did not come to the wedding. She and Ms Heard were not on particularly great terms, for several reasons.” Depp, who is also dad to son Jack with Paradis, said during his testimony that his “goal is the truth” in the court case, adding that he hopes to “clear the record” of the allegations made against him by Heard.