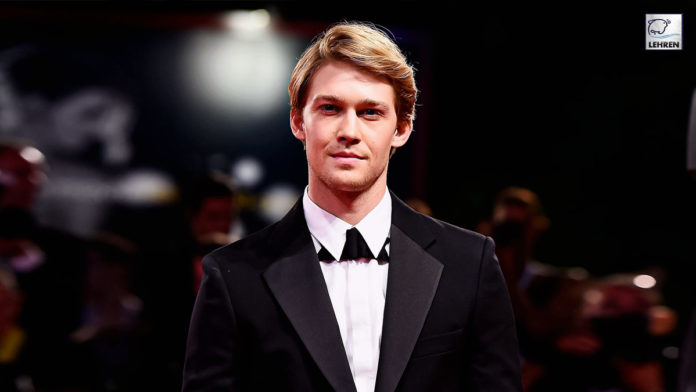 Stars at Noon is set for theatrical release on October 14, 2022, and is based on the novel by Denis Johnson of the same name.

Joe stars as Daniel in the upcoming film. Alwyn starred alongside Margaret Qualley, who plays Trish and the two play lovers who get entangled in a mysterious yet dangerous escapade in Nicaragua in the upcoming thriller Stars at Noon. The actor was photographed taking a seat while talking about the film, which is scheduled to be released on 14 October.

During the New York premiere, Joe looked dapper in a muted mustard yellow crewneck t-shirt and a black leather blazer. A new trailer for the upcoming film is also recently released. The trailer shows Trish (Qualley), a journalist, meeting Daniel (Alwyn) at a bar before getting inadvertently caught up in his risky line of work.

The trailer then moves to Trish who attempts to distance herself from Daniel’s secretive occupation, but soon finds herself getting pulled into the danger surrounding him. Stars at Noon is set for theatrical release on October 14, 2022, and is based on the novel by Denis Johnson, The Stars at Noon. It will be available for streaming on Hulu on October 28.

The IMDb synopsis of the upcoming film reads, “In 1984’s Nicaragua, a mysterious English businessman and a headstrong American journalist strike up a romance as they soon become embroiled in a dangerous labyrinth of lies and conspiracies and are forced to try and escape the country.”

Not a while ago, Joe was spotted with his girlfriend Taylor Swift on a romantic holiday to the Bahamas, sharing a rare PDA on Sunday as they exchanged passionate kisses during a swim in the sea. Just weeks after their intimate holiday, it was reported that the singer got engaged to her boyfriend of more than five years, Joe Alwyn, for a ‘few months.’ However, neither Joe Alywn nor Taylor Swift confirmed their engagement rumours.