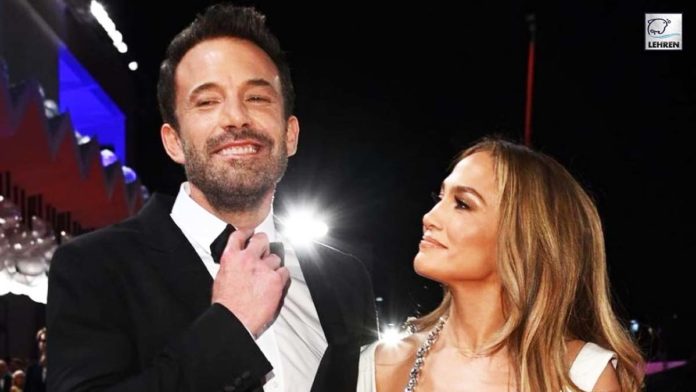 The Oscar winner and the Hustlers star were looking like a dream in their jaw-dropping ensembles. They kissed, hugged, and looked at each other lovingly during the photo-op, and the pictures are just splendid. Jennifer Lopez And Ben Affleck made their debut on the red carpet return as a couple after 18 Years.

Jennifer dripping in Cartier diamonds in a beauteous body-hugging pearl-white mermaid gown for the occasion that made fans’ jaws hit the floor. The dress featured a body-sculpting silhouette with a plunging neckline, ruffled asymmetric hemline, and thigh-high side slit by Georges Hobeika. The singer was just looking stunning.

JLo completed her gorgeous dress with a Cartier bracelet, rings, and earrings. She embellishes it with bright yellow and white diamonds to accessorise her pearl-white ensemble. She was looking glamourous with her JLo Beauty which included shimmery-smoky eye shadow, shiny nude lip shade, blushed cheeks, sparkling highlighter, and sharp contour. While Ben Affleck accompanied his date in a dapper black Dolce & Gabbana tuxedo. He sport it with a black bow-tie, dress shoes, and a white shirt.

Fans had been excitedly looking for the big moment. Just the day before, Bennifer was seen pulling up to the festival in a water taxi. They were seen wrapping each other on the boat and walking hand in hand on the dock during holidays.

From enjoying vacations and date nights together to spending time with their families and celebrating major milestones by each other’s sides, Bennifer has shown their relationship is back on.

According to a report in E! News, a source close to JLo said, that she hasn’t been this happy in a long time. The source added that Jennifer and Affleck are fully committed to each other and are on the same page about not needing to get married. The source continued, “They have been meshing their lives and families and don’t feel the need to get engaged yet or even tie the knot.” “They have both been there and don’t feel it’s necessary. They are both very secure within their relationship and Ben worships her. It’s truly meant to be and everyone around them thinks they are a perfect match,” the source further added.