Jennifer Garner Accidentally Texts A Stranger And Gets An Awkward Reply 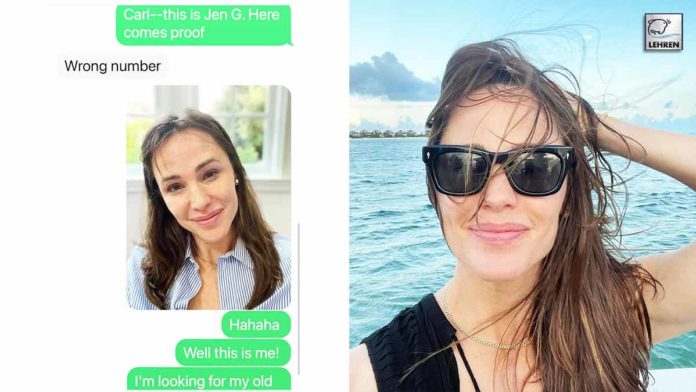 Recently Jennifer Garner contacted an individual she believed to be one of her former co-stars from the '00s series Alias, The response she got from the stranger was humbling.

Hollywood star Jennifer Garner accidentally sent a selfie to the wrong person when she was attempting to reconnect with an old acquaintance. Garner, 49, mocked herself on Instagram on Friday by posting a snapshot of a text conversation she had with the stranger she thought was her old Alias co-star Carl Lumbly.

The text conversation reads, “Carl — this is Jen G. Here comes proof,” she texted. However, before the strangers reply, “Wrong number,” Garner had already sent a smiling picture of herself. “Hahaha well this is me!” the actress replied after realizing the mistake.

She posted the picture with a caption that reads, “You know the one time you take a selfie to prove to someone you’re you? And get a ‘wrong number’ message just as it’s gone out into the world?'” Garner wrote in the caption. “Well, it’s humbling, isn’t it.” The actress added the hashtags: “#IfYouAreWorkingWithCarlLumbly #PleaseTellHimImLookingForHim #BristowAndDixon.”

Meanwhile, according to PEOPLE, in Alias, Garner stars as Sydney Bristow opposite Marcus Dixon, who was played by Lumbly. The group came together earlier this week to commemorate the show’s 20th anniversary. From 2001 through 2006, ABC broadcasted the famous series for five seasons. In celebration of the reunion, Garner debuted on TikTok, sharing pictures of her co-stars from the show as well as videos of the meeting in person. The sweet video features Michael Vartan, Merrin Dungey, Kevin Weisman, Gina Torres, Mia Maestro, and Victor Garber.

However, Garner also penned a lengthy homage to creator J.J. Abrams on Instagram, praising him for pushing the actors ‘through and past the norm.’ Garner wrote, “Since the end of the show, April of 2005, running into a cast or crew member from Alias has always led to this question – When will you get everyone back together for a reunion? The 20th anniversary seemed like as good an excuse as any, so the call went out – reunion party is happening, pass it on!”

Garner added, “We missed everyone who was working and couldn’t make it in. We missed you, Jabrams, (because I screwed up and made this happen on a night you were busy). But man, it felt so good to be together again.” Meanwhile, the actress stated to The Hollywood Reporter in March that she’d be open to a revival of the series.