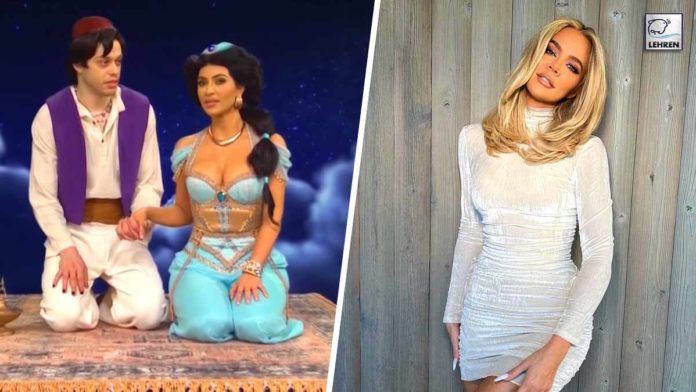 It seems like the only thing that matters for Khloe Kardashian is her older sister Kim Kardashian's happiness.

Khloé Kardashian didn’t realize that her sister Kim Kardashian might start dating Pete Davidson. Although, the 37-year-old reality TV personality finally gave the Saturday Night Live cast member her stamp of approval after being ‘surprised’ Kim started dating him after her separation from her husband, Kanye West.

Recently, a source told Hollywood Life that “Khloé thinks it’s awesome that Kim is dating Pete. Khloé thinks Pete is so different from anybody Kim has ever dated.” While talking about her reaction, the source stated, “She was just as surprised as everyone else when she found out they were into each other. But she seriously couldn’t be happier.” “Khloé loves that Pete is super chill and down to earth,” the source continued.

The source further stated to the outlet, “She gets along with him really well and thinks he’s absolutely hilarious.” However, it seems like the only thing that matter for the Revenge Body star was her older sister’s happiness. “Khloé’s so happy for Kim because she can see that Kim is happier than she’s been in a while.” The couple went to an escape room in Los Angeles with the Good American founder and friends for a fun date night.

Kim kept things simple with a black hooded sweatshirt and skin-tight black leggings to match a pair of thigh-grazing boots. Pete matched his billionaire girlfriend by wearing a black hooded sweatshirt on top of his white T-shirt. The couple rolled up to dinner in one of Kim’s 2021 Mercedes Benz Maybachs. Kanye reportedly gifted Kim five Maybachs for Christmas in 2020, according to TMZ.

Meanwhile, Khloe stuck with the all-black theme and wore a bomber jacket to match a pair of leggings and Nike’s. For unversed, Kim started dating Pete back in October, after hosting an episode of SNL with the cast member. The Skims founder filed for divorce from Kanye back in February after nearly seven years of marriage. The famous couple shares four children together, North, Saint, Chicago, and Pslam.