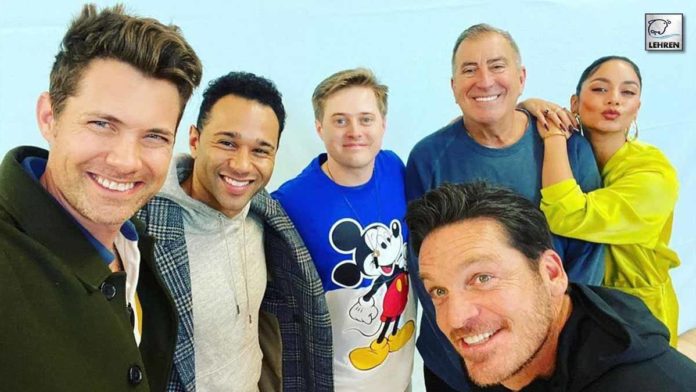 High School Musical alums reunited at the Dream It Convention in Paris. HSM director Kenny Ortega took to his Instagram and shared a series of photos and videos. In one of the photos, female lead Vanessa Hudgens poses with former co-stars Corbin Bleu, Bart Johnson and Lucas Grabe. Alongside the snap, the filmmaker included the hashtag, “#hsmforever.”

Drew Seeley, who provided the singing voice for Zac Efron’s character Troy Bolton, also shared a photo on his social media. The photo features four actors and Kenny at the event, writing “Like no time has passed. #HSM reunion in Paris.” Fans went wild in the comments over the nostalgic get-together, with one fan writing, “Okay, now I’m freaking out!” and another commenting, “This is so epic! It’s amazing to see you guys together after all these years.”

This is not the first time the original gang has gotten back together. Back in 2020, most of the cast, including Vanessa, Lucas, Corbin, Monique Coleman and Ashley Tisdale, had a reunion on Zoom amid the coronavirus pandemic. Notably absent: Zac. The first High School Musical premiered as a Disney Channel Original Movie in 2006 with a sequel premiering the following year. In 2008, High School Musical 3: Senior Year was theatrically released.

Earlier this year, Disney+ announced plans for High School Musical 4: The Reunion, a streaming movie that will be made exclusively in the world of High School Musical: The Musical: The Series. Corbin, Monique, Lucas and Bart have all signed on for the project, along with Alyson Reed and Kaycee Stroh. While Vanessa and Zac aren’t set to reprise her roles as Gabriella and Troy, they do remain nostalgic about their Wildcat days.

In June, the actress revisited East High School in Salt Lake City, posting a video walking around where High School Musical was filmed. Just weeks later, Zac shared an Instagram pic of himself posing in the same location with a fist held in the air, writing, “Don’t you… Forget about me”—each a reference to the 1985 cult film The Breakfast Club. However, Vanessa later clarified that their visits didn’t have anything to do with each other or the upcoming High School Musical 4.