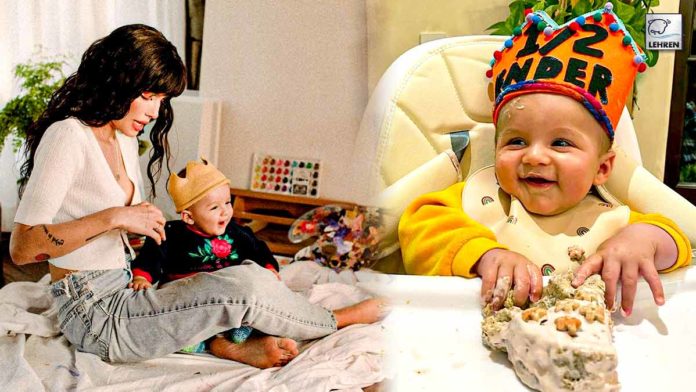 In the post, Halsey described their child as "sweet and curious and funny." It also includes a gallery of candid and rare photographs of her baby.

Halsey was overjoyed as she celebrated their new-born child Ender’s first birthday on Thursday, July 16. Halsey raved over their “little tiny baby” while posting candid photos of Ender and partner Alev Aydin.

Halsey looked radiant in the first shot, as they sat with the baby tucked in between their knees. The “Closer” singer donned light-washed pants and long brown hair, while Ender sported a knit crown and flowery sweatshirt.

Other shots in the carousel included Ender and mom wearing similar Yankees jerseys, recordings of him crawling and cooing, and pictures with daddy Alev. The one-year-old was clearly Halsey’s pride and happiness in every picture.

In their message to new-born Ender, the stars were overjoyed. “My little tiny baby is a big one year old today! Time flies, and I want to land the plane. permanently. your baba and I love you so much. you are smart and fiercely determined and sweet and curious and funny. I am so lucky that you found me Ender Ridley!”

Halsey recently discussed their experience with abortion and miscarriages in an opinion piece for Vogue that was published on July 1 in response to the Dobbs v. Jackson Supreme Court ruling. After experiencing three losses and serious complications all before the age of 24, they stated how having access to abortion treatment “saved their life.”

“One of my miscarriages required ‘aftercare’,” Halsey revealed in her op-ed. “A gentle way of saying that I would need an abortion, because my body could not terminate the pregnancy completely on its own and I would risk going into sepsis without medical intervention.”

They went on to remark on how having Ender only confirmed their conviction in abortion access, stating, “Many people have asked me if, since carrying a child to term after years of struggling to do so, I have reconsidered my stance on abortion. The answer is firmly no. In fact, I have never felt more strongly about it.”

They continued, “My abortion saved my life and gave way for my son to have his. Every person deserves the right to choose when, if, and how they have this dangerous and life-altering experience. I will hold my son in one arm, and fight with all my might with the other.”

Check Out: Drake’s Team Reveals If He Was Really Arrested In Sweden