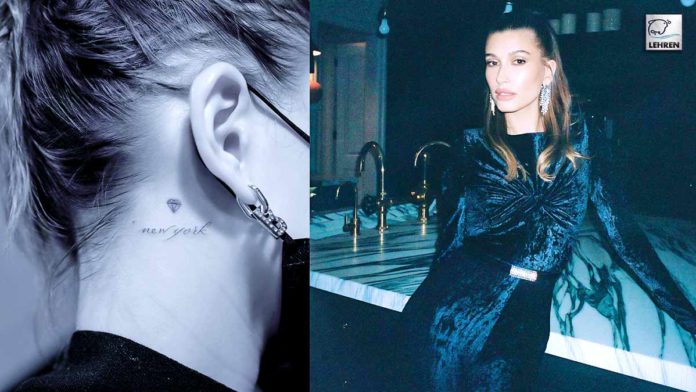 Although Baldwin's latest tattoo is one of a few on her neck, she's earlier asked her husband to stop with the neck inks.

Hailey Baldwin has added another piece of ink to her collection. The model, 25, paid tribute to her love for New York City with a small tattoo behind her ear, which tattoo artist Doctor Woo of The Hideaway @ Suite X in Los Angeles shared to Instagram. “Lil NY love on Hailey awhile back,” he captioned the photo.

The tattoo reads ‘new york’ in lowercase cursive, underneath a diamond. Hailey Bieber trained at the American Ballet Theatre in Manhattan when she was a teenager. However, her ballet career ended due to a foot injury. Baldwin’s latest ink comes after she got matching peaches with husband Justin Bieber in March, celebrating the release of his single Peaches from his sixth studio album Justice.

Meanwhile, a day after Bieber, 27, revealed his tattoo on his neck, Baldwin displayed the same tattoo on her forearm, also done by Woo. The Drop the Mic alum previously revealed that she has “20-something” tattoos, telling Elle that the one piece of ink she “would never” get again is a small handgun on the inside of her middle finger, which she got done as a teenager in 2015.

Hailey stated, who has long been an outspoken supporter of gun control, stated in March, “I think at 18, I was like, ‘Yeah! That looks cool.’ But now, as a 24-year-old, I would never do that. I think guns are violent.” Meanwhile, Bieber has her beat with more than 60 tattoos on his body.

Although Baldwin’s latest tattoo is one of a few on her neck, she’s asked her husband to stop with the neck tats. “I think I’m done on my neck. That’s a Hailey request,” he said in his 30-minute YouTube special Justin Bieber: Next Chapter last year. The couple recently celebrated their third wedding anniversary after exchanging vows in an intimate ceremony in September 2018.