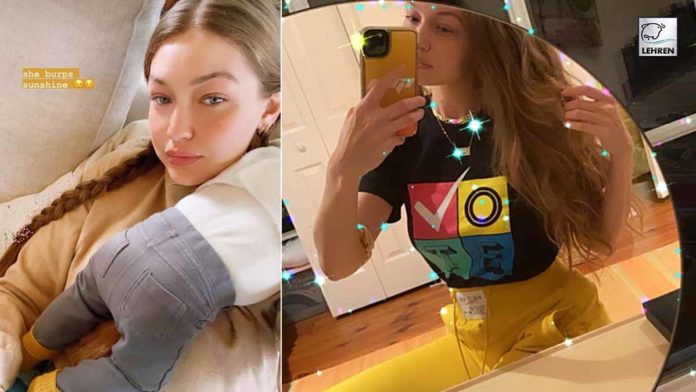 Taking to her Instagram stories, Gigi Hadid shared the first selfie with daughter ZiGi. The fans gush as the model calls her little one sunshine. Read below to know more.

Supermodel Gigi Hadid and beau Zayn Malik welcomed a baby girl in the month of September. The couple is over the moon and is embracing parenthood. The new parents announced the arrival of their little bundle of joy via social media. They shared a glimpse of their daughter alongside a heartfelt caption. Now, Gigi Hadid has shared the first selfie with baby ZiGi on her Instagram story.

A while back, on the day of Halloween, Gigi Hadid shared a family picture. In the picture, Zayn Malik was cradling baby ZiGi in his arms while Hadid was looking at her with total awe. However, she covered the face of the little one with a Hulk GIF.

Taking to her Instagram story, Gigi Hadid has now shared the first selfie with her baby daughter ZiGi. In the picture, Gigi looks adorable holding the little one in his arms. However, even in this picture, the new mommy is hiding her baby’s face.

Hadid is holding her baby daughter in a burping position as she posses for a selfie. She accompanied the picture with a small caption, “She burps sunshine.”

In the picture, Gigi looks beautiful donning a tan sweater. She is also wearing blue trackpants as baby lays on her shouler. Baby ZiGi is wearing a white tee, with grey jeans and mustard socks on her tiny feet.

The supermodel has her hair in plaid as she and the baby make fans gush because of the overflowing cuteness.

A couple of days back, Gigi took to her Instagram story to express her gratitude towards those who showered her baby daughter with blessing. She also thanked the ones who sent adorable gifts for the little one.

As of now, Zayn and Gigi haven’t disclosed the name of their daughter while fans are calling her baby ZiGi.