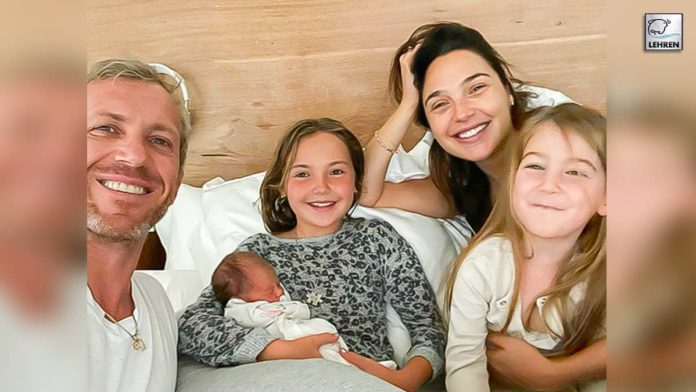 The Wonder Woman actress welcomed her third child, a daughter in June. She named her Daniella.

Gal Gadot feels like her family is complete! The 36-year-old Israeli actress appeared on The Late Late Show With James Corden on Tuesday night. When she was asked how it has been since her family has expanded, and her reply suggest that her family is complete now. The Wonder Woman actress has been married to businessman Yaron Varsano since 2008. The couple share three daughters, Alma, 10, Maya, four, and Daniella, four months.

Gal said on the show with English actor Henry Lloyd-Hughes, “On the one hand, it’s overwhelming because you’re being outnumbered and all of that, but, on the other hand, I feel like we now we’re whole, we have been expecting her the whole time and now it feels so gad because I feel like in the first one you worry about having your first child.”

Gadot continued, “I don’t know how many of you here are parents. Look like we have some even grandparents here. The first one you’re so nervous about how it’s going to be. The second one, you worry about the first one, how she’s going to take it.” She added, “Then by the third one, you’re, like, they can deal with each other, let’s enjoy this. And then you’re thinking, I don’t know if I’m ever going to have another baby so I just enjoy every phase of it.”

However, Gal was on the show to promote her upcoming Netflix blockbuster Red Notice in which she stars alongside Dwayne ‘The Rock’ Johnson and Ryan Reynolds. Corden asked which of her A-list co-stars made her laugh more as she replied, “Both of them, but Ryan just went for it.” She said that Reynolds was purposely looking to make everyone on set bust-up as she described the actor was “making us laugh, trying out different accents or ever inch improvising jokes in it.”

Wonder Woman star wen on saying, “Before I break and I’m the easiest to break, Chris used to call me ‘giggles Gadot’ because I laugh all the time and I’m sure easy to break, and when I try to hold it in, my eyes start to twitch. So if Ryan started to see the eyes start to twitch, he would punch me with jokes until I broke. It was a very expensive movie for many reasons.”

Red Notice is directed and written by Rawson Marshall Thurber. The screenplay of the movie follows an FBI profiler (played by Dwayne Johnson aka The Rock) who teams up with the world’s most wanted art thief (played by Ryan Reynolds) to successfully track down an ‘elusive crook’ (played by Gal Gadot) who has a major heist up her sleeve. The movie will begin streaming on Netflix on November 12.