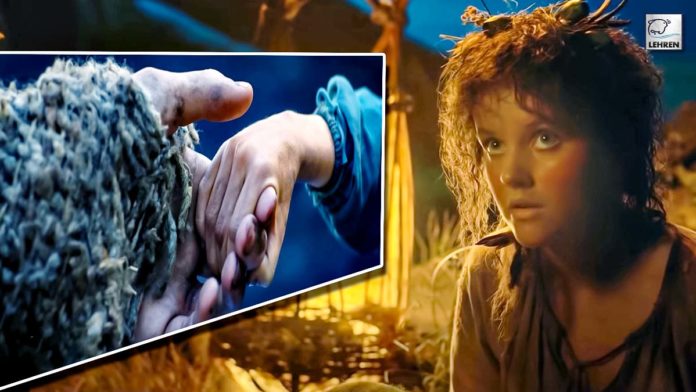 The official description of the upcoming show reveals it is set thousands of years before the events of The Hobbit and The Lord of the Rings.

More than four years after Amazon secured the rights to The Lord of the Rings franchise, the first teaser has been finally released from The Lord of the Rings: Rings of Power. The teaser for the upcoming series was released during Sunday night’s Super Bowl LV1, with fans given their first glimpse at the franchise’s diverse new direction, which features the first-ever black elf in Middle Earth’s history.

The trailer begins with footage from a large seaport as a young woman’s voice is heard saying, “Haven’t you ever wondered what else is out there? There are wonders in this world beyond our wandering. I can feel it.” Another shot reveals a massive waterfall as a young woman drives her dagger into the side of a mountain and holds on for dear life.

However, another character is seen braving a storm on the sea in a small boat, while the franchise’s first black elf is seen catching an arrow that was fired at him, before loading it into his own bow and firing it back towards his unseen nemesis in the dark woods. The trailer also makes it clear the show is set before The Lord of the Rings movie and book trilogy and The Hobbit book and movies.

The official description reveals the show is set in, ‘the fabled Second Age of Middle-earth’s history,’ set thousands of years before the events of J.R.R. Tolkien’s The Hobbit and The Lord of the Rings. The show “will take viewers back to an era in which great powers were forged, kingdoms rose to glory and fell to ruin, unlikely heroes were tested, hope hung by the finest of threads, and the greatest villain that ever flowed from Tolkien’s pen threatened to cover all the world in darkness.”

The description continues, “Beginning in a time of relative peace, the series follows an ensemble cast of characters, both familiar and new, as they confront the long-feared re-emergence of evil to Middle-earth.” 20 years after the original film trilogy was released, the show will juggle a whopping 22 characters and multiple storylines, fleshing out the various lands and battles that were briefly touched on while Frodo journeyed to Mount Doom.