Fans Are Convinced BTS V And Blackpink Jennie Are DATING! 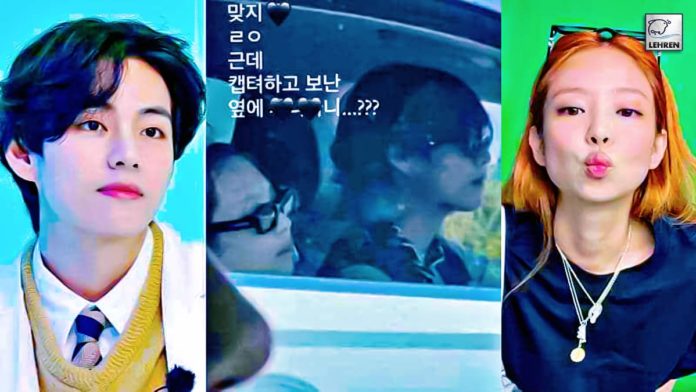 BTS V and Jennie have been spotted by some fans together on Jeju island, sparking dating rumours. Read what fans have got to say about it!

This isn’t the first time that an idol has been shipped, perhaps even linked to dating another idol in the K-Pop industry. But for some weird reason, fans are convinced somehow, that BTS’ V aka Taehyung and Blackpink’s Jennie are indeed dating. For the unversed, a viral image has been making rounds on the internet, where Jennie can be seen with V in a car, clicked by a fan.

The fan further clarified that the image was clicked on Jeju island, in South Korea, where the alleged couple have been rumoured to be vacationing. Although the image looks blurred, one can easily spot V driving the car, with Jennie sitting right next to him. Since the image has gone viral, fans have lost their cool completely, as they gave out mixed reactions. Some believed that the pics are photoshopped, while others were sure that the image is real and that V and Jennie were actually snapped together.

While fans have been justifying the image, defending the young idols and declaring them as ”just friends’ who’re hanging out together, others pointed out how the suspicion was surrounding the two idols for a long time. While this isn’t the first time that V has been linked with Jennie, many media outlets had revealed how the two had been dating, with no proof whatsoever to back their claims. This time, with the image circulating everywhere, fans are convinced that there’s definitely something cooking between the two. For the unversed, Jennie had confirmed dating BIGBANG’s G-Dragon, for almost a year. With Jennie now being rumoured to be dating V, fans are assuming that the couple has called their relationship quits and that Jennie has found her new love in V.

Interestingly, when BTS made their official solo Instagram debut a few months back, fans observed how the members had only been following each other and their label, HYBE entertainment. But some fans had noticed V’s account, at some point in time, the ‘winter bear’ singer had started following Jennie on Instagram. After being noticed by fans, V quickly unfollowed her and had justified saying how he was new to using the app and was unaware of its features, hence ended up following her by mistake.

While some fans bought this, others were still left unconvinced, as they thought the 26-year-old was indeed, making an excuse, and even accused V of stalking Jennie’s Instagram account. With now V’s picture with Jennie floating on the internet, fans have been joining the dots and are convinced that there’s something brewing between the two.

BTS’ label HYBE hasn’t yet responded to the picture and is expected to release an official statement regarding the matter sooner or later, but Jennie’s label YG Entertainment has released a statement saying, “We have nothing to say”. With YG’s cryptic response, fans are further forced to believe, that there’s indeed more to the picture, and are convinced that perhaps this time, it isn’t just a ‘rumour’.