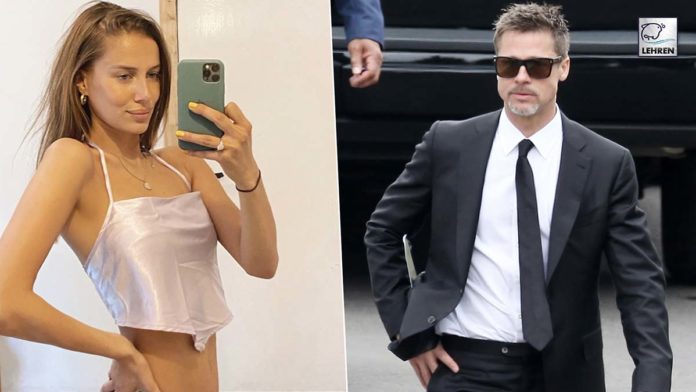 Brad Pitt's rumored girlfriend Nicole Poturalski has shared a photo with a positive message. Well if you are unversed about Brad Pitt’s new link-up rumors then let introduce you to Nicole Poturalski.

Nicole Poturalski is someone who focuses on positivity, as her relationship with Brad Pitt begins to buzz with speculation. She sent a message that implies smiling through ‘bad energy.’

Brad Pitt’s new alleged Gf Nicole Poturalski is already been in headlines since the time when the pair was spotted in France at Le Bourget Airport.

Taking to her Instagram amid the speculation and buzz about her and brad’s relationship status the german model posted a picture.

“Never stopping embracing life, laughing, making memories and try to see the good in people. No attention to bad energy, just smiles because life is too short,” she wrote in as her caption for a series of photos Instagram on September 9.

Well if you are unversed about Brad Pitt’s new link up rumours then let us introduce you to Nicole Poturalski.

Model Nicole Poturalski’s made headlines after she began dating Brad Pitt in 2019. Here’s what you need to hear about a potential girlfriend of Brad Pitt.

Us Weekly first released the pictures of Brad Pitt’s rumored new girlfriend on August 26. Nicole The couple was seen arriving at the Le Bourget Airport in France together.

The couple then moved to southern France’s Chateau Miraval, where Pitt owns a country estate. Brad and Nicole were also seen getting cosy in November 2019 during the show of Kanye West at the Hollywood Bowl in November 2019.

Nicole Poturalski is Germany Based Model

Nicole Poturalski is a model who goes officially by “Nico Mary,” as per a report by PopSugar.  the  three modelling agencies represented her are: A German Management, Official Models in New York, and NEXT Models in Los Angeles.

While Nicole splits her time between Berlin and LA at the moment, she is originally from Bergkamen, a city in North Rhine-Westphalia, Germany.

At 19 Nicole had moved to Berlin to follow her modeling career with her mother, Agnieszka.

Allegedly, Nicole was married to the owner of Berlin ‘s popular Roland Mary Borchardt Restaurant. She and her former partner both share a seven-year – old son.  Reports also state that Brad Pitt had regularly visited Borchardt during his  movie premiere of Once Upon a Time In Hollywood  .

Therefore she also uses French and Italian as intermediates. It was mentioned in the article that Nicole was 13 when she was spotted while visiting Disneyland Paris by a talent scout.

Nicole Poturalski Has Been Married Before

Nicole was reportedly married to the owner of Berlin’s famed Borchardt Restaurant Roland Mary. She also shares a seven-year-old son with her former spouse. Reports also claim that Brad Pitt had visited Borchardt frequently while he was in Berlin for the film premiere of Once Upon a Time in Hollywood.

Girlfriend of Brad Pitt, Nicole has an impressive portfolio.  she was included on the covers of a famous magazine like Harper’s Bazaar and Grazia’s German Editions. She has also been featured in Elle Germany’s September 2020 issue. Nicole also sports a distinct tattoo on her neck’s back which says “Moon.”

Nicole Poturalski Is An Activist

Nicole’s not afraid to speak out. She has shared her opinions on Instagram on social inequality and gun control.

Brad Pitt is reportedly wired up with Angelina Jolie, in a tumultuous divorce settlement. Their battles and negative remarks are no longer a private matter and the whole world is interested in knowing what’s going to happen next.

ALSO READ – Brad Pitt Upset With The Rumours Of Angelina Jolie Moving Away To The UK?

It would be fascinating to hear Jolie’s reaction with the news of Nicole Poturalski as Brad Pitt’s girlfriend catching fire.

As for the new couple in the area, we can’t wait to see their PDA’s.