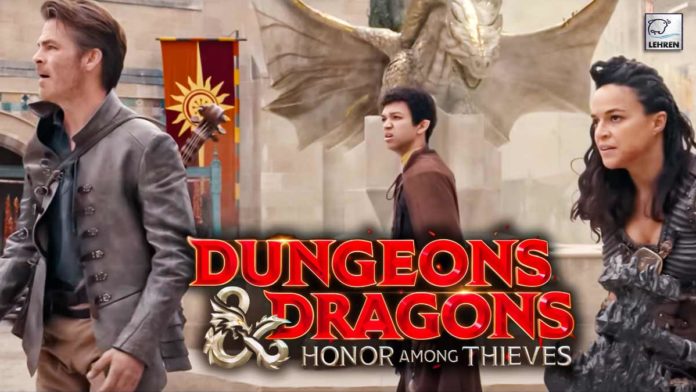 The live-action movie adaptation of the popular tabletop game franchise is scheduled to be released in cinemas on March 31, 2023.

The trailer opens with a thief and a barbarian- Chris Pine and Michelle Rodriguez being dragged to get their heads chopped off. Michelle Rodriguez’s character saves their lives with her fighting skills. But it seems this is just the beginning of their problems. They mistakenly help the wrong person steal the wrong thing and unleash the greatest evil the world has ever known. So to save the world a thief and another barbarian team up with three equally dubious characters played by Regé-Jean Page, Justice Smith, Sophia Lillis and thus begins their adventure.

The trailer promises a perfect mix of thrilling, innovative action and some healthy dose of humor. The monsters, unique creatures also add to the thrill.

The official synopsis of the film reads: A charming thief and a band of unlikely adventurers undertake an epic heist to retrieve a lost relic, but things go dangerously awry when they run afoul of the wrong people. Dungeons & Dragons: Honor Among Thieves brings the rich world and playful spirit of the legendary roleplaying game to the big screen in a hilarious and action-packed adventure.

Check out: Chris Evans Had Fun Exchange With Jeremy Renner After His Accident

Dungeons & Dragons: Honor Among Thieves is directed by Jonathan Goldstein and John Francis Daley, who, along with Michael Gilio, wrote the screenplay. The film is scheduled to be released in cinemas on March 31, 2023.