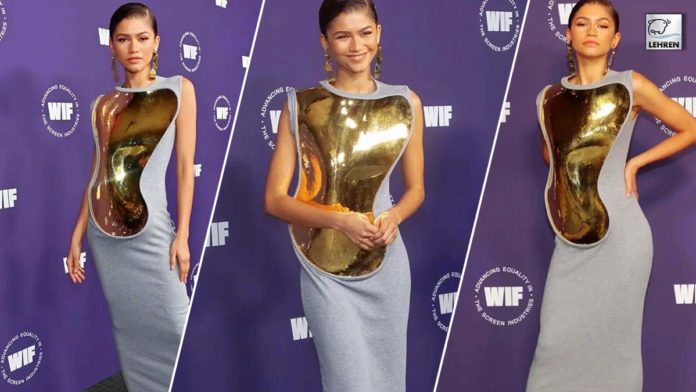 The actress walked the red carpet at the 2021 WIF Honors at the Academy Museum of Motion Pictures in Los Angeles on Wednesday night.

Zendaya set pulses racing and nailed the red carpet. She made an appearance on Wednesday night at the 2021 WIF (Women In Film) Honors at the Academy Museum of Motion Pictures in Los Angeles. She wore a grey bodycon dress with a metallic plate of gold armor. To complete her look, she wore matching gold earrings and pointed-toe metallic heels.

Her stylist, Law Roach, called her a ‘queen’ on his social media as he shared the fabulous look. He posted a video of the actress with a caption, “She was the Queen… @zendaya wearing @loewe SAY SOMETHING??”

This sculptural piece and the rest of Jonathan Anderson’s Loewe collection made waves last week during its runway presentation in Paris for its craftsmanship and psychedelic experimentation. However, the look that the actress carried on Wednesday was handcrafted in France by metal sculptors using unique soldering and hammer techniques.

The 25-year-old Euphoria actress was among the honorees for the evening, which supports WIF’s educational and philanthropic programs and its advocacy for gender parity for women throughout the industry. The WIF honors also celebrate the women who are transforming the industry for the better, with innovative reimaginings of how the workplace can be set up for women to support women with compassion, care, and a renewed commitment to equity across intersectional identities.

However, this is not the first time when zendaya made the Best Dressed lists. Her most recent looks, especially the ones she stuns while promoting Dune, left everyone in awe. Earlier this month, she celebrated her birthday during the Venice Film Festival. On her Instagram, she thanked Valentino and its creative director Pierpaolo Piccioli for the jaw-dropping look she rocked at dinner.

Fans can’t wait to see more of Zendaya’s fashionable looks when she continues to promote Dune and does the press tour for Spider-Man: No Way Home later this year starring zendaya and tom holland. Zendaya informed ET in July and said, “I can’t wait for everybody to see Spider-Man when it does come out. And you know, we all work so hard and we’re all so close to that. I’m excited! We’re gonna have a good press tour I think.”