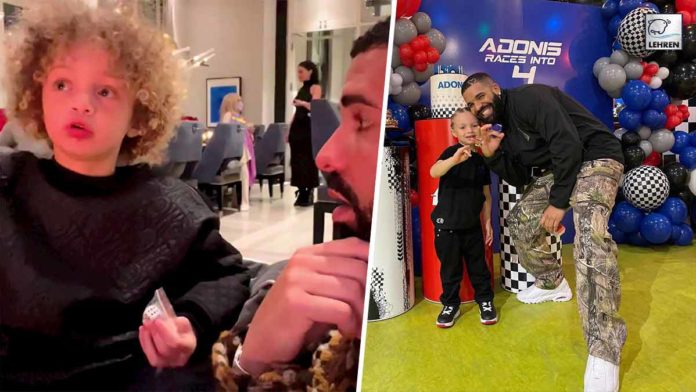 Drake shares Adonis with Sophie Brussaux with whom he was first linked together in January 2017.

Drake’s son Adonis Graham is pretty confident that he’ll be ‘bigger’ than his dad when he’s older. In an adorable video shared on the rapper’s Instagram, the Certified Lover Boy rapper, debated with his son over their potential height differences in the future. In the video, Drake asked his toddler, who recently turned four, “Do you think you’re going to be bigger than me.”

Despite his age, Adonis replied with a very confident ‘yeah.’ However, earlier in the conversation, Adonis was curious if his father would ‘get much bigger’ than he already is which Drake reassured him was unlikely. Drake then asked, “When you’re my age, how big are you gonna be?” but Adonis seemed more interested in showing off his French skills. “You want I teach you how to speak en France?” he replied.

He then spoke a few phrases in the Romance language to his father who did his best to emulate them. After Adonis finished speaking in French, the One Dance rapper asked him what he said. Adonis then explained, “I said, ‘When you’re older, you are all broken, and you’re going to turn back into space.'” Drake laughed and asked “Is that really what you said or are you making stuff up?” and the two laughed heartily as the video ended.

Drake shares Adonis with Sophie Brussaux, a French artist. The couple were first linked together in January 2017, and Brussaux became pregnant with Adonis not long after. However, Drake maintained his son’s privacy for a while going as far as not to post a picture of him until more than 2 years after he was born. He did, however, mention having a son in the lyrics of the 2018 track, titled March 14.

Check Out The Adorable Video Of Drake Son Adonis Here: