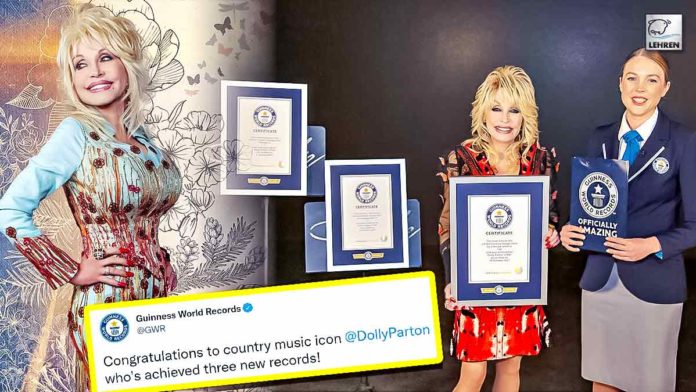 Dolly Parton also broke her record for the most hits on the chart in general, with 109 songs to make it onto Billboard's list.

Dolly Parton is adding more awards to her remarkable music career. The Jolene singer, 75, was awarded three new certificates in Nashville, Tennessee, by the Guinness World Records, the association announced on Thursday. The two new record titles for the singer are for the most decades (7) and most No.1 hits (25) on the Billboard US Hot Country Songs chart, both for a female artist.

Parton also broke her record for the most hits on the chart in general, with 109 songs to make it onto Billboard’s list. “This is the kind of stuff that really makes you very humble and very grateful for everything that’s happened. I had no idea that I would be in Guinness World Records this many times! I am flattered and honored,” said Parton in an interview with the organization. “I’ve had a lot of people help me get here. Thanks to all of you and all of them for helping me have all of this.”

Dolly Parton added, “I’ve loved being able to make a living in the business that I love so much. I’ve been so fortunate to see my dreams come true, and I just hope to continue for as long as I can. You’re going to have to knock me down to stop me!” Parton began making hit songs in 1967 with Something Fishy and Dumb Blonde, and most recently achieved success on the Billboard list with her latest duets with Reba McEntire for Does He Love You and Michael Bublé for Cuddle Up, Cozy Down Christmas.

Meanwhile, her most recent songs bring the total number of decades in which she’s charted to seven. The GWR announcement said that her new titles join Parton’s previous record for most decades with a Top 20 hit on the US Hot Country Songs chart (6), which was awarded in 2018. Apart from her record-breaking music success, Parton is slated to appear in the last season of the Netflix hit Grace and Frankie, which stars her 9 to 5 costars, Jane Fonda and Lily Tomlin.