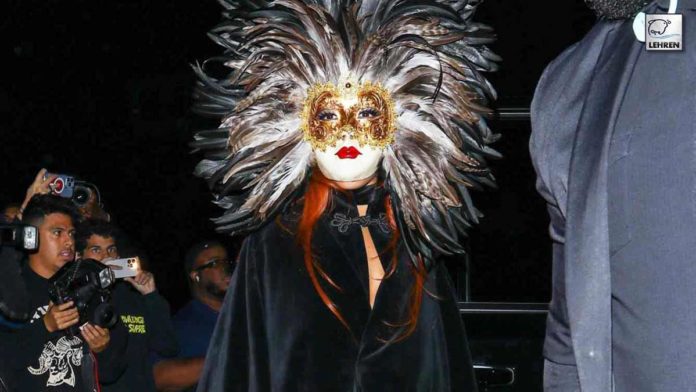 Doja Cat celebrated her 27th birthday. the singer has thrown a star studded masquerade-themed in West Hollywood on Friday night. The party was attended by A-list celebs including, Justin Bieber Hailey Bieber and Kendall Jenner. However, her 27th birthday bash turned into a kind of nightmare as she accidentally revealed part of her birthday suit.

As Doja hopped into the backseat of a black SUV following the star-studded party, the musician’s black velvet cloak shifted and fully exposed her right breast. However, Doja appeared unnoticed by the wardrobe malfunction while seated in the chauffeured vehicle. The songstress appeared to be almost fully nude under the long cover-up, which she wore with an elaborate headdress.

The headgear featured long, outlandish black and white feathers and a gold eye mask with embossed detail. Underneath the Venetian mask, Doja’s face was painted white with a carefully outlined red lip. Her eyes peeked through the face covered with a sleek black liquid cat-eye complete with fluffy lashes. The star, who recently shocked fans by completely shaving her head, wore an orangey-red wig with long strands that tumbled over her shoulder.

The singer-songwriter’s celebration was hosted at West Hollywood at Raspoutine, with guests including Hailey Bieber, Kendall Jenner, and Ty Dolla $ign. She took to her social media and uploaded a lighthearted clip. In the video, she said, “Hello everyone, it’s my birthday today so I just wanted everyone to know I will be keeping tabs on each and every one of you who don’t send me a happy birthday wish.” She playfully wrote in the caption, ‘instills fear among the masses.’

Doja Cat went without makeup in the seconds-long reel. She was dressed in a lacy green nightgown with a sheer black robe draped sensually over her arms. Doja stood in a large bathroom, with a white-walled shower visible in the background. Her eyebrows appeared to be either bleached or shaven as she stood in the mirror and recorded herself.

Check Out Photos and Videos From Doja Cat Birthday Party: