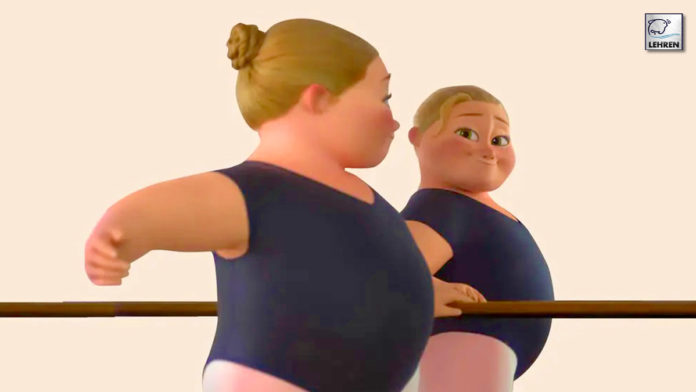 Disney has had several tall, fair, slim Cinderellas. Most of them only have created an impression of having an unrealistic body. However, as the definition of beauty has changed now, Disney is bringing heroin to its universe with whom we can actually relate. Disney has created their first plus-size protagonist for a powerful short film about body dysmorphia.

In the company’s 85-year history of making movies, plus-size characters have only ever featured in the roles of villains or extras, with fans praising the change. The film is titled Reflect and follows the story of a young plus-size ballet dancer ‘who battles her own reflection, overcoming doubt and fear by channelling her inner strength, grace and power.’

the latest short film is helmed by Hillary Bradfield. Reflect is a part of the second series of Short Circuit, a series of experimental short films. The animation has left fans in tears, with one viewer penning that she wished the film had been made when she was a child. Disney fans have long called on the corporation to create plus-size princesses, with a post in 2015 that showed Disney characters given plus-size makeovers going viral.

Meanwhile, Disney was accused of pushing ‘unrealistic beauty standards’ on children after including a character with exaggerated proportions in the short film Inner Workings. The animated short, which was initially released in 2016, tells the story of an office worker named Paul who has to tame his desire to break out of his dull routine and have fun. However, Paul’s love interest Kate had sparked outrage online because of her enormous derriere, stick-thin arms and a tiny waist that is barely bigger than her neck.

Several social media users blasted the unrealistic depiction of Kate’s body after screenshots of the cartoon were shared online by US-based Twitter user Glitch, who shared them with the caption, ‘In no world did [Disney] need to do this,’ as reported by DailyMail. The post, which included a photo of Kate, sparked fresh criticism online, with users accusing Disney of setting ‘unrealistic’ body standards for its young audiences.