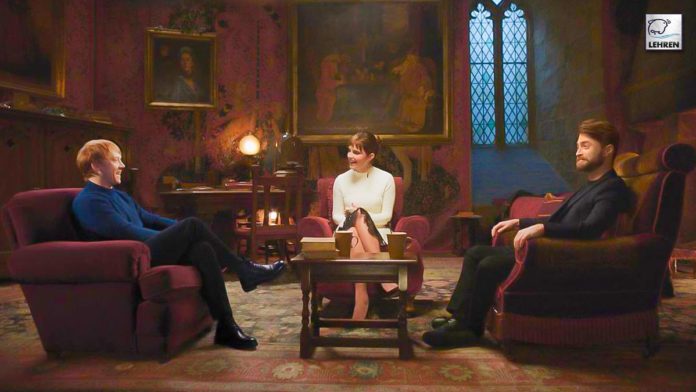 From first kisses, horrible haircuts, to growing up on the 'greatest playground in the world,' they revisited down the memory lane.

Harry Potter 20th Anniversary: Return to Hogwarts is scheduled to debut on January 1, 2022, on HBO Max. And, Daniel Radcliffe, Emma Watson, and Rupert Grint are already recalling some of the nostalgic memories as they joined their former co-stars in heartwarming scenes released ahead of the reunion special.

The short videos show the stars, who starred as Harry Potter, Hermione Granger, and Ron Weasley, talking about spending their formative years on the set of the iconic movie series and talking fondly of the ‘strong bond’ which they will always have. In the first clip, Emma, who was the tender age of 11 when the debut film was released, admits, “It feels like no time has passed and loads of time has passed.” Rupert adds, “I feel like this is the perfect time to sit down with everyone and reminisce.”

While talking of the Wizarding World, Daniel admits, “I’ll always be happy to talk about it. I think people expect me not to want to talk about it. But that’s like somebody never talking about their childhood or teenage years. ‘Every part of my life is connected to Potter and to Leavesden. My first kiss is connected to someone here, my first girlfriends were here… everything I can think of is that related right now. It all spirals out from the Potter set somewhere.”

Harry Potter star continues, “Everyone also says things like ‘you grew up on the screen.’ Well yes and know. We did our growing up privately still, we just did it on a film set, and we did it with each other, and that’s bizarre.” Elsewhere, Daniel can be heard saying, “The thing that scared me most was the invitation. But there’s something so joyous about seeing everyone.”

In another teaser clip, Daniel looks back on the overgrown hair which he and Rupert often sported in the Harry Potter films. He revealed, “My one bone to pick with Mike Newell, is that every year when we left for the film, we finished a film, they said, ‘don’t cut your hair over the summer, we’ll cut it when you get back, and we’ll decide what they want to do.'”

Daniel continues, “And me and Rupert both dutifully grew our hair for months, and then came in and he was like, ‘Great!’ “And we went, ‘No, no no no no. You’re not leaving us like this?’ We’re supposed to be becoming teenagers and dating girls in this film. Like, you can’t? That’s not what it’s gonna be is it?” “So I think we were pretty devastated as we realised that it was. But still, I still love the man!”