Chicago West Complimenting Cousin Stormi Webster’s Hair Is All You Need To Light Up Your Mundane Weekday; Watch 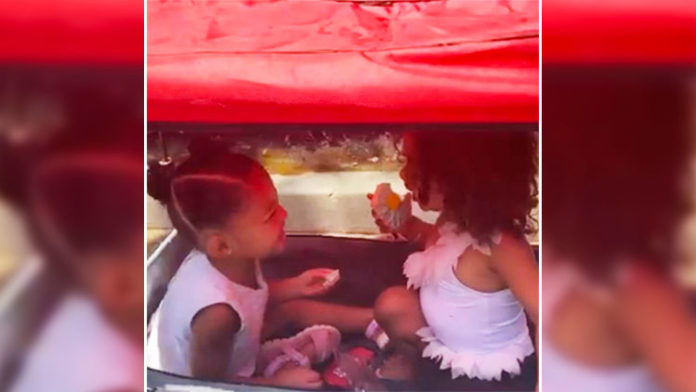 When cousin sisters Stormi Webster and Chicago West struck up a conversation with each other, it was all fun and laughter, leaving the moms Kylie Jenner and Kim Kardashian gushing. Taking to her Instagram handle, Kylie Jenner shared her daughter Stormi’s adorable video playing in a red-roofed wagon with niece Chicago West. And throughout their ride, the little kids were munching cookies and chuckling away. Stormi and Chicago are nothing less than besties, with an age gap of only two weeks between them.

While the two little kids played together and enjoyed their fun ride, Chicago West gently touched Stormi and complimented her hair. In the video we can hear Chicago saying Stormi, “I like your hair.” Stormi giggled on the compliment and replied, “Thank you.”

The video is currently making rounds on the internet and everyone is gushing over the bonding of the two cousins. The video is enough to light up someone’s mundane weekday amid the lockdown.

Well, we know that Stormi Webster rules the internet with her adorable eyes and chubby cheeks and Chicago’s being around her is like a cherry on the top.

A couple of days back, Kylie Jenner posted a video on her Instagram where she kept a bowl full of yummy candies in front of Stormi and asked her to pick three of it but when she comes back from the washroom, till then the 2-year old wasn’t allowed to touch the candy bowl. The little tot kept chanting “Patience, Patience” and passed the test and her expressions on getting the candies after Kylie returned were priceless.