When Cardi B Was Asked Why’d She Marry Offset, A Father Of 3 Children With 3 Different Women? 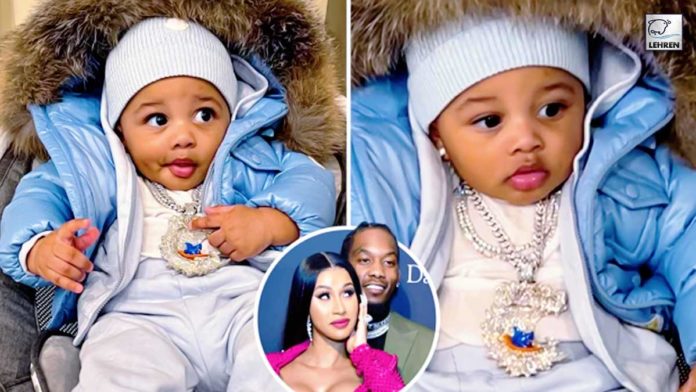 The couple recently welcomed their second child together, son 'Wave Set Cephus'. Read to know about Cardi's response upon being asked a very personal question about her baby daddy, Offset!

Cardi B and her husband Offset have named their second child, a boy, almost after 7 months since giving birth to him. The couple shared the baby boy’s pictures online and revealed his name as ‘Wave Set Cephus’. Writing the sea, Cardi B put a wave, a dinosaur and a teddy bear emoticon sharing pictures of baby Cephus, who looked adorable wearing a furr jacket, a blue beanie and a silver chain around his neck.

To clear the confusion, Cephus is said to be an Aramaic name and is originally associated with the English speaking countries. The name is also referred to in the Biblical and Christian contexts, meaning ‘Stone’. His father, Offset, also shared an adorable picture of the baby boy, bare chest, on his Instagram. Cardi B revealed how, when her husband Offset suggested the name ‘Wave’, she was instantly sold. The couple welcomed their second child on the 6th of September 2021.

Cardi B, apart from her fire-spitting rap, is also known for being an amazing mother, who knows how to prioritize her kids and family before anything else. Talking about the same, the 29-year-old rapper had shared back in 2019, how motherhood changed her. She said, “I could shake my a** I could be the most ratchet-est person ever, I could get into a fight tomorrow, but I’m still a great mom. All the time, I’m thinking about my kid. I’m shaking my a, but at the same time, I’m doing business. I’m on the phone with my business manager saying, make sure that a percentage of my check goes to my kid’s trust.”

For the unversed, Cardi’s husband Offset has 3 kids with 3 of his past partners. Cardi was once asked about her decision of having kids with a man, who already has 3 kids. Her response was, “When I was pregnant with Kulture, a lot of people [were] like, ‘Oh, he has three kids already; why would you have a kid with somebody that has three kids?'” Cardi recalled. “And it’s like, how is that such a bad thing? My dad has eight kids, and we all get along, and it feels better, fuller. And with Offset, I feel like his kids just bring a pop of fun to life when they’re in his house. I actually love it. It brings out a different side of him that I like to see, and I love to see my baby interacting with her siblings. The more the merrier.”

ALSO READ – Inside The ‘Ranbir-Alia’ Wedding- Guests Were Served This Menu!

The two had almost announced separation, back in 2020. Cardi had even filed for a divorce back then, citing how Offset was caught cheating on a pregnant Cardi. But later the couple reconciled.