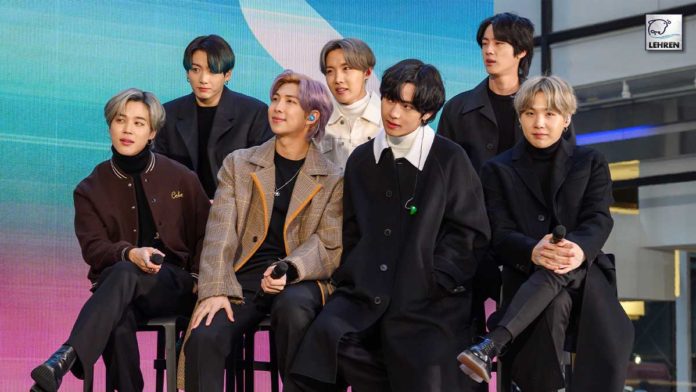 BIGHIT recently issued a statement revealing that BTS are moving forward with plans to fulfil their military service.

BTS are set to fulfil military service. Just four months after announcing a hiatus to focus on their solo career, all seven popular band members reunited in Busan for a free Concert in Busan to Support South Korea’s World Expo Bid. And after their impressive performance, BTS’s agency Big Hit took to Weverse to announce that the K-pop band will join the military service.

The reports of BTS members joining the South Korea military service have been swirling around for over a year, and fans. The members were waiting for the decision of the South Korean government. Now, BTS has decided to fulfil their service. However, BTS Jin (military service) will withdraw his request by the end of the month.

BIGHIT issued a statement revealing that BTS are moving forward with plans to fulfil their military service. The statement continues, “After the phenomenal concert to support Busan’s bid for the World Expo 2030, and as each individual embarks on solo endeavours, it’s a perfect time and the members of BTS are honoured to serve.”

The statement continues, “Since the creation of BTS over ten years ago, the band has risen to international success, broken records, and catapulted K-Pop into the global stratosphere. BIGHIT MUSIC has focused on the milestone moment when it would be possible to respect the needs of the country and for these healthy young men to serve with their countrymen, and that’s now.”

BIGHIT statement further reads, “Group member Jin (BTS Jin birthday) will initiate the process as soon as his schedule for his solo release is concluded at the end of October. He will then follow the enlistment procedure of the Korean government. Other members of the group plan to carry out their military service based on their own individual plans.”

The statement added, “Both the company and the members of BTS are looking forward to reconvening as a group again around 2025 following their service commitment. With the release of their first anthology album earlier this year it opened the path to allow the members to take some time to explore individual projects.”

The statement continues, “As part of the HYBE family, we support and encourage our artists and are beyond proud that they will each now have time to explore their unique interests and do their duty by being of service to the country they call home. Yet To Come (The Most Beautiful Moment) is more than a track from their latest album, it is a promise, there’s much more yet to come in the years ahead from BTS.”

BTS Army has left heartbroken and feeling proud at the same time. They took to social media to share their reactions on BTS military service (2022). Moreover, 2025 BTS, We Will Be Waiting, With Jimin Till The End, By 2025 and Trust BTS are trending on Twitter.