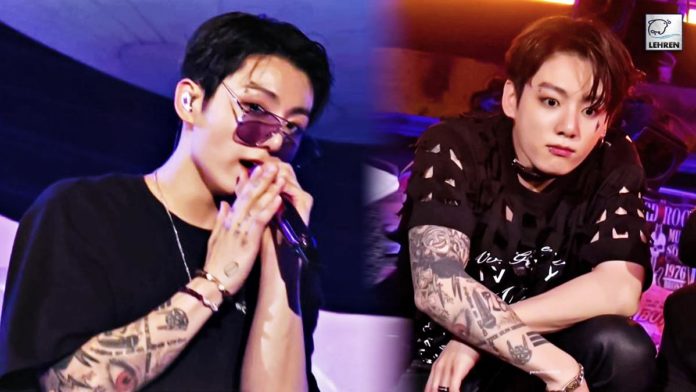 When the maknae of the group first disclosed his tattoo back in 2019 and had left many fans in disbelief, as they all refused to believe those were real tattoos. Blame this on the Korean pop culture, among many things that the Korean idols are prohibited by their managing labels, tattoos are one of the big no-nos for any K-pop idol. But kudos to many Gen-Z idols, like that of Jungkook, for breaking through the barriers and eliminating stereotypes, one at a time.

South Korean society has a lot of restrictions, which aren’t illegal in nature but aren’t promoted either. Moreover, only professional doctors are permitted to open tattoo parlours. But Jungkook, perhaps, is the only male idol in K-Pop to have changed people’s perception surrounding tattoos.

To start from the very beginning, Jungkook first displayed his debut tattoo after a long break in September 2019. The golden boy had them make a visit to his hometown in Busan and had met a fan, who requested a signature. When the fan noticed a small tattoo on his hand, it was then that read ‘ARMY’. A few months later, all the members of the group gathered at the airport, it was then when the media papped him with the tattoo. The tattoo doesn’t need any explanation, it just goes out to say how much Jungkook loves his fans, and as a token of appreciation, he made a tattoo.

But the 24-year-old has always teased his fans by not displaying his tattoos completely, only adding to fans’ curiosity. However, Jungkook recently has sent ARMY into a frenzy after they’ve spotted in the recent ‘BTS MUSTER SOWOOZO 2021’ DVD, some fans have already purchased their copies and have been sharing the viral clip, where Jungkook’s full sleeves tattoos are visible.

In a now-viral clip, Jungkook can be seen leaving the backstage area, after finishing one of his performances. He can be seen sporting a back tank top, showcasing all of his tattoos! Watch the clip here!

For the unversed, each of Jungkook’s tattoos has a hidden meaning. ARMY: The BTS fandom ARMY, V for Taehyung, RM: Namjoon, MY: Min Yoongi, J: Jin, Jungkook, J-hope, JM: Jimin, +++: Bonding BTS and ARMY together, Purpleheart: Borahae (I purple you) and ultimately, The crown that specifies as BTS is the King. He also has a BTS ARMY logo hidden in his sleeves, which was revealed much later. He also has a woozy emoticon on his middle finger, the meaning of which is still unknown. But many have suggested how the emoticon’s eyebrows are similar to that of cooky.

ALSO READ – Ashish Chanchlani Refused To Do Film With Kiara Advani? Know Why!

It’s not the first time when ARMYs have seen Jungkook’s tattoos though, but this was definitely the first time his shoulder tattoos have got exposed.