Britney Spears’ Sons Will Not Attend Her Wedding With Sam Asghari 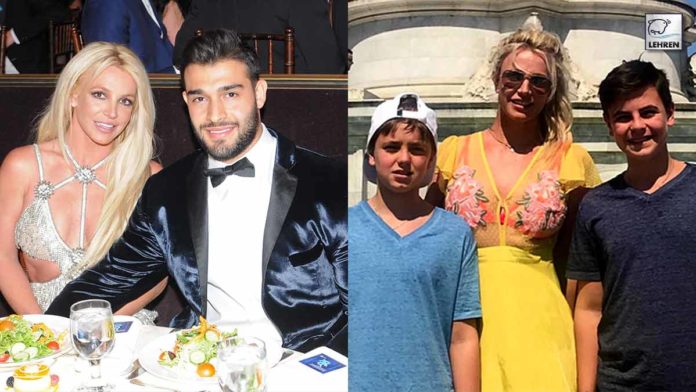 Britney’s mother, Lynne Spears, her dad, Jamie Spears and as well as her sister, Jamie Lynn were not invited to Britney and Sam’s wedding ceremony.

Britney Spears and her fiancé, Sam Asghari, are getting ready to start a new chapter in their life. Britney’s sons, meanwhile, will not be present to celebrate their mother’s special day. According to TMZ, Britney Spears will have a small wedding party, which will not include her boys, who wish their mother the best. Britney and Sam will tie the knot in Los Angeles on Thursday. Brit’s brother, Bryan Spears, is expected to attend, but her mother, father, sister Jamie Lynn, and Brit’s two boys are not.

According to Kevin Federline’s attorney, Mark Vincent Kaplan, Sean Preston and Jayden James will not be there. “While the boys will not be present, Kevin and the lads are pleased for Britney and wish her and Sam the best in the future,” he stated. According to insiders, around 100 people are expected to attend the tented ceremony where Sam and Britney will exchange vows.

Britney previously posted a video of herself and Sam clutching a glass of champagne and freshly painted nails on Wednesday, presumably in preparation for their wedding. However, staff have already begun preparing the event for the arrival of guests, as Brit and Sam prepare for what lies ahead. Sources also revealed to Entertainment Tonight that Kevin Federline will not be interfering with whether or not Britney and his kids will attend the wedding.

The source added to the outlet, “Kevin is absolutely not interfering in any way with Sean Preston and Jayden James’ decisions to not attend Britney and Sam’s wedding.” “It has nothing to do with him. They are 16 and 15 years old and made the choice themselves. The wedding is a bit overwhelming for children of their age, and they preferred not to go.”

A source also revealed to ET that Britney’s mother, Lynne Spears, her dad, Jamie Spears and as well as her sister, Jamie Lynn were not invited to Britney and Sam’s wedding ceremony. The source said, “Ever since Britney and Sam talked about getting married and planning their wedding, inviting them was never a question.” Britney was previously married to Kevin Federline from 2004 to 2007. In addition to that, she was also married to Jason Alexander in 2004. On the other hand, this will be Asghari’s first wedding.