Britney Spears And Sam Asghari Tie The Knot In An Intimate Ceremony In LA, Details Inside 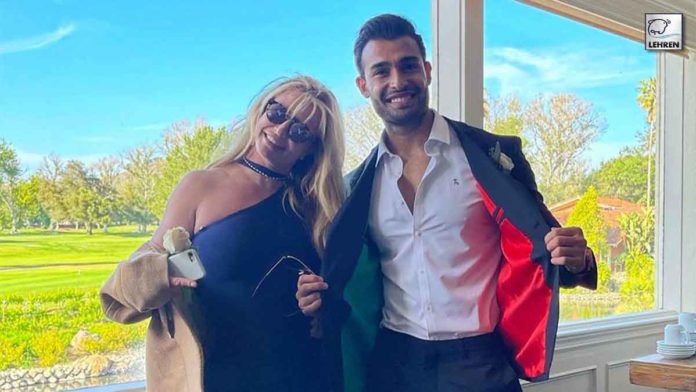 Britney Spears officially exchanged the vows with her fiance of five years, Sam Asghari at her sprawling Thousand Oaks, California home on Thursday evening. On her special day, Britney wore a custom Versace bridal gown created by legendary fashion icon Donatella Versace, who was also in attendance for the couple’s wedding. Britney Spears’ wedding ceremony was a star-studded event, with the likes of socialite Paris Hilton and actress Drew Barrymore seen arriving at Britney’s house.

Britney’s Versace wedding dress had ‘an off-the-shoulder cap sleeve and a deep V-shaped slit in the leg,’ as per E! News. Britney previously teased Donatella’s potential involvement in bringing her wedding gown to life in an Instagram shared in March. The outlet also dished that the Womanizer songstress wore jewellery by Stephanie Gottlieb and her makeup was courtesy of Charlotte Tilbury.

The Queen Of Pop Madonna, who famously shared a VERY steamy kiss with Britney on stage during the 2003 MTV Video Music Awards, was among the stars who watched Britney Spears and Sam Asghari’s wedding. Before any sign of the bride, party planning staff were captured unloading a Cinderella-style carriage onto the property, along with a gorgeous Camarillo White Horse, and hoards of other wedding decors, according to TMZ.

Talking about Britney spears wedding guest list, Paris Hilton, who was famously part of Britney’s partying crew in the early 2000s before her conservatorship was put in place, was also invited. Paris was joined at the star-studded soiree by her mother Kathy Hilton. Paris Hilton’s husband Carter Reum was also reportedly invited. Donatella Versace, who reportedly helped bring Britney’s Versace bridal gown to life, rolled up to the wedding venue in a snazzy black sports car with her window rolled down.

Drew Barrymore put on an equally cheerful display as she arrived in her own chauffeured vehicle with a female pal. Britney’s superstar attorney Mathew Rosengart, who was key to helping the star end her long-standing conservatorship last year, was spotted driving himself to the wedding venue. Missing from the wedding will be the Toxic singer’s estranged family, including her ex-conservator father Jamie Spears, and her younger sister Jamie Lynn Spears. Selena Gomez also reportedly attended Britney Spears’ wedding.