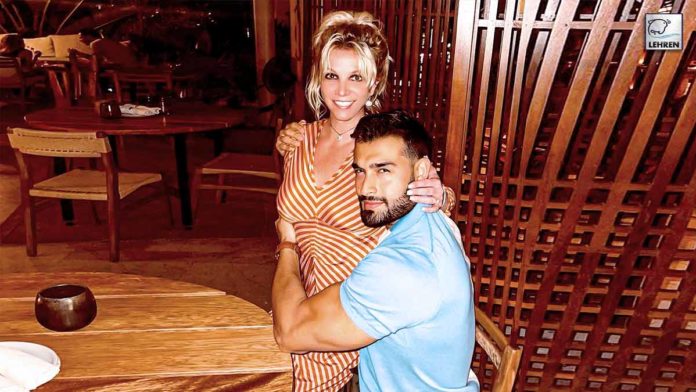 Sam Asghari initially met Britney Spears in October of 2016 when they worked together on her video Slumber Party, and they began dating soon thereafter.

Britney Spears and fiancé Sam Asghari are finally getting married! The Oops!… I Did It Again singer and the actor-fitness professional will exchange vows in front of about 100 people on Thursday, according to TMZ. While Britney’s brother Bryan is slated to be present, her parents Jamie and Lynne Spears, and sister Jamie Lynn are not expected to attend, as the outlet reported. A source told the outlet that it was not immediately clear who will give Spears away at the altar.

The Grammy-winning pop star and Asghari were seen in a social media clip she posted to Instagram Stories on Wednesday in which they were riding in a Rolls-Royce. In the video, Spears sipped champagne and spoke in what appeared to be an English accent as she said she enjoyed riding in the elegant vehicle and felt sophisticated with jewels on her nails. Asghari and Spears got engaged in September of 2021, and he was seen looking for rings shortly thereafter.

The celebrity lovebirds have enjoyed a series of luxury getaways in the months since, as they have been seen in Hawaii, Las Vegas and opulent Mexican resorts in Cabo San Lucas and Cancun. Though it was not immediately clear what Spears would wear in her walk down the aisle, she and Asghari were seen meeting with Donatella Versace less than three months ago, as per DailyMail.

Previously, Britney Spears has stated she had a number of plans following the end of her 13-year conservatorship last November, among them getting married, purchasing a new home and having more children. Spears already shares sons Sean Preston, and Jayden, with ex-husband Kevin Federline. Britney and Asghari revealed they were expecting in April, and tragically suffered a pregnancy loss in May. Both have expressed hopes of having a child in the future.

For unversed, Sam Asghari initially met Britney Spears in October of 2016 when they worked together on her video Slumber Party, and they began dating soon thereafter. Spears was previously married to Federline from 2004 until 2007, and to childhood friend Jason Alexander in January of 2004 before getting it annulled less than two days later. However, Sam Asghari has never been married. In regards to the family invites or lack thereof, Spears’ bad blood with her father, mother and sister has been in the headlines in the wake of the end of her conservatorship in November of 2021.