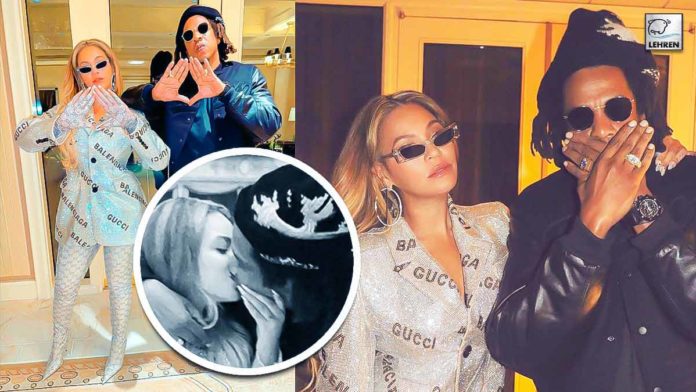 The happy couple dated for several years before they decided to marry in 2008. And four years later, they welcomed their first child, Blue Ivy.

Beyonce is recognized for the photo dumps of her very fashionable shoots. And in her latest gallery, Beyonce included some rare PDA snaps of her kissing husband Jay-Z. The 40-year-old Single Ladies hitmaker could be seen sharing a sweet smooch in an Instagram post shared on Tuesday celebrating the rap mogul’s recent 52nd birthday.

In a rare move, Queen Bey shared three black and white snaps of the power couple cozying up and in a lip lock. The two also posed up for a few snaps including one of them making a diamond with their hands which Jay-Z made famous as he calls it the ‘dynasty sign.’ No doubt Beyonce wanted all eyes on her as she sported a shimmering silver look including a crystal-adorned Gucci x Balenciaga coat from they recently released The Hacker Project collaboration. The mogul captioned the series of snaps as “This is a LOOK. I love that purse.”

Since that already wasn’t enough high fashion she also donned matching crystal-adorned trousers, boots, and fingerless gloves with Gucci’s famous monogram on them. Meanwhile, there were no details overlooked as the Ivy Park founder also showed off a silver crystal heart clutch by Gucci. She finished off the look by accessorizing with tiny shades with clear plastic frames.

Beyonce’s blonde locks were worn down as she emphasized her natural looks with complimentary make-up topped off with a swipe of bright red lip. Jay also looked dapper in a black leather letterman’s jacket over a black T-shirt, jeans, white sneakers, and a black beanie. There was also a snap of the Roc Nation mogul smiling next to a birthday cake three days after turning 52.

The couple was initially romantically linked around the turn of the century, although neither has given an exact date as to when their relationship started. The happy couple eventually began collaborating musically and notably went on to win the Grammy Awards for Best R&B Song and Best Rap/Sung Collaboration for their 2004 track Crazy In Love. The couple dated for several years before they decided to exchange the vows in 2008, and they went on to welcome their first child, Blue Ivy, into their lives four years later.