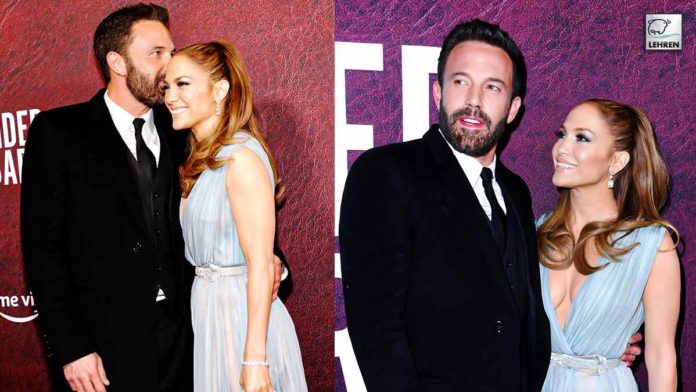 The Tender Bar had its world premiere at the London Film Festival earlier this year and is slated to release on December 17, 2021.

Ben Affleck and Jennifer Lopez attended the premiere of the upcoming drama feature, The Tender Bar, at the TCL Chinese Theatre in Hollywood on Sunday evening. The 49-year-old actor and the hitmaker, 52, appeared to be enjoying each other’s company at the event, and Affleck was spotted staying close to his partner on several occasions.

Affleck donned a nearly all-black outfit during the event that was partially comprised of a sharp-looking three-piece suit. The Good Will Hunting actor also sported a sizable overcoat that kept him nice and comfortable in the chilly late fall weather. The performer contrasted the dominant tone of his outfit with a stark white button-up shirt.

Meanwhile, Lopez wore a flowing and partially transparent light blue dress during the event. The Marry Me star also sported a set of silver-colored high-heeled shoes while she spent time with her partner. The Grammy-winning hitmaker added several elements of shine to her outfit with numerous articles of jewelry. The singer-songwriter carried a small white clutch bag that offered a bit of brightness to her largely monotone clothing. Her gorgeous dark blonde locks cascaded onto her shoulders and backside and complimented the shade of her outfit.

The Tender Bar follows the early life of Moehringer as he bonds with the patrons of a local bar while dealing with the absence of his father. The movie initially entered the development stage in 2013, although it was later announced that George Clooney had picked up the project and would serve as its director in 2020. Filming took place earlier this year around various locations in Massachusetts. The Tender Bar had its world premiere at the London Film Festival earlier this year and it currently holds a 44% score on Rotten Tomatoes.