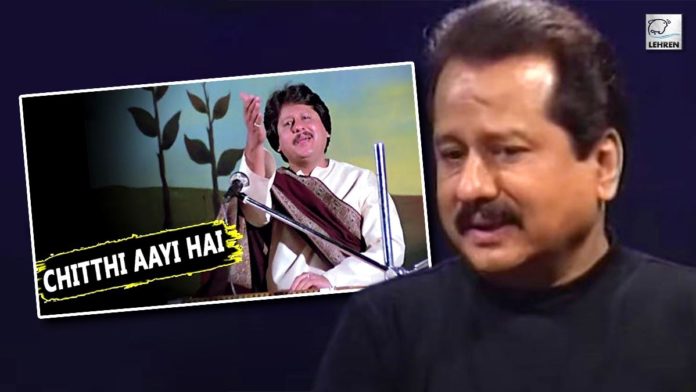 There are songs that we love to hear repeatedly to get into a cheerful mood, and then there are some that touch our soul and change something within us. The late legendary singer Lata Mangeshkar did something similar with her songs and voice. Be it ‘Ae Mere Watan Ke Logon’ or ‘Lukka Chuppi’, her patriotic songs always bring tears to our eyes and give us goosebumps. One such patriotic song was sung by Ghazal maestro Pankaj Udhas. If you are an Indian, you must have heard his most popular song ‘Chitthi Aayi Hai’.

It instils a feeling of belongingness towards our beloved mother India and also makes us fall in love with Pankaj Udhas’s soulful voice. While it is one of the most popular songs of his career, Pankaj didn’t want to sing it in the first place.

Pankaj Udhas, who was offered this song for the film ‘Naam’, ghosted the film’s producer Rajendra Kumar. The things escalated to such a point that Rajendra accused him of unprofessionalism. Interestingly, all this happened due to a minor misunderstanding.

During an interview with us, Pankaj Udhas recalled the time and said, “This song has an interesting story behind it. In fact, I never wanted to sing this song.”

Elaborating the interesting anecdote, Pankaj Udhas said, “When this film was being made, I was considered for this particular song. Salim Khan Sahab had written the story. Mahesh Bhatt Sahab was the director of the film. Rajendra Kumar was the producer. They all felt that this song should be sung by a real-life singer and not an actor on the stage. The situation in the film is that there is a live concert and there’s a singer singing the song. Then there’s a change of heart as far as Sanjay Dutt is concerned and he comes back. So, they wanted a real-life singer. They needed a singer who was popular and known by the masses. So, they considered me. So, when the producer asked me to do this song, he didn’t tell me this idea. But instead, he said, ‘Pankaj, you have to appear in our film.’ And I got scared. He told me that the film features his son Kumar Gaurav and Sanjay Dutt and I’ll have to be a part of the film too.”

Also Read: How Gadar Was Shot At Amritsar Railway Station With Real Crowd

He further added, “I got scared because I never was cut out to be an actor in the first place. And I never wanted to be an actor. My focus has always been singing. I told Rajendra Kumar ji that I’ll revert soon. But, I didn’t call him back. He really got mad then. Then he called my eldest brother, Manoj Ji. They are best of friends. He called Manoj Ji and said, ‘Your brother has no etiquette and no courtesy. Koi tameez nahi hai.’ Manoj Ji then called me and asked me, ‘What’s the problem?’ So, I told him that I can’t act in movies. So my brother suggested that if I don’t want to act in the film, I must call the producer and tell him. So, I called him, apologized and said that I don’t want to act in the film. He said, ‘Who asked you to act in the film?’ He then told me that he wants me to appear in the film as Pankaj Udhas.”

Pankaj eventually said ‘yes’ and the rest is history. The soundtrack for the film contributed to its huge success. ‘Chhithi Aayi Hai’ was selected as one of the 100 songs of the millennium by BBC Radio worldwide.

‘Chitti Aayi Hai’ is a song from the film ‘Naam’, directed by Mahesh Bhatt, starring Sanjay Dutt, Nutun, Kumar Gaurav, Amrita Singh and Paresh Rawal. Salim Khan had written the film, David Dhawan edited it, while Laxmikant-Pyarelal gave the music. The film was released in 1986.

Must Watch: When Crowd Turned Violent While Filming Partition Scene In Gadar