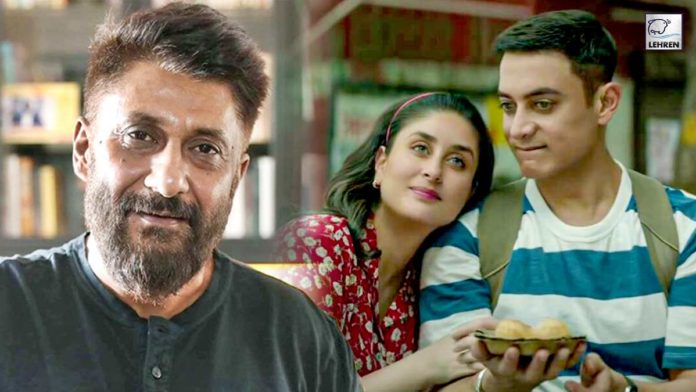 Kareena Kapoor Khan had requested people to watch Laal Singh Chaddha instead of boycotting the film before its release. She urged fans not to boycott the film for the sake of around 250 people, who worked on the film. The Kashmir Files director Vivek Agnihotri took a dig at her statement talking about the same 250 people involved in making films.

Laal Singh Chaddha has faced major backlash from people after they took on social media to boycott the film. It is an official adaptation of the Hollywood movie Forrest Gump featuring Tom Hanks. The Hindi version stars Aamir Khan, Kareena Kapoor Khan, Mona Singh, and Naga Chaitanya. Many people issued boycott against LSC as the lead actor allegedly mocked Hinduism in his 2014 film PK and he had also stated in 2015 that India is not a safe country to live in.

Recently, during an interview with Siddharth Kannan, Kareena reacted to the hashtag boycott Laal Singh Chaddha. She said, “The fact is that they shouldn’t boycott this film, it’s such a beautiful film. And I want people to see me and Aamir (Khan) on screen. It’s been three years, we’ve waited so long. So, please don’t boycott this film, because it’s actually like boycotting good cinema. And people have worked so hard on it; we’ve had 250 people work on this film for two-and-a-half years.”

Vivek Agnihotri reacted to her statement, indicating how many people from the industry did not support his film The Kashmir Files. The movie was a hit at the box office but it was also boycotted, and people from the industry did not support but are now supporting Laal Singh Chaddha. Out of anger, the director pointed same 250 people who work hard for a small budget film but Bollywood Mafias don’t let such movies achieve success.

He tweeted, “When good content small films are sabotaged, boycotted by the dons of Bollywood, when their shows are taken away by multiplexes, when critics gang up against small films… nobody thinks of 250 poor people who worked hard on that film. #Bollywood.”

He further wrote, “Why nobody from Bollywood raises voice when the kings of Bollywood boycott, ban and destroy careers of so many outsider actors, directors, writers? The day common Indians get to know the arrogance, fascism and Hinduphobia of the dons of Bollywood, they’ll drown them in hot coffee.”

Laal Singh Chaddha had a dry spell at the box office. The movie could barely earn 80 crores at the box office collection in six days of its release. Released on the occasion of Raksha Bandhan, the festive day did not help the movie attract the audience or mint good money on opening day. In fact, the very next day 1300 shows of LSC were reduced due to low run.