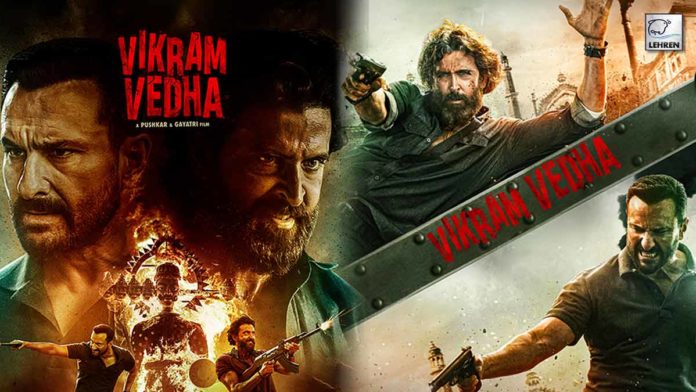 Hrithik Roshan and Saif Ali Khan starrer Vikram Vedha mint a total of 1.12 crores with its advance booking collection, will the film emerge as the next blockbuster?

VikramVedha: Hrithik Roshan and Saif Ali Khan starrer Vikram Vedha is all set to hit the theatres in a few days. On the other hand, the lead actors are currently busy promoting their film to ensure they reach the masses. While as per the trade reports it is now believed that the film will hopefully open up to a better performance at the box office than the previous films of the year which turned out to be disastrous. Here’s how much the film is expected to earn with its advance bookings-

As per a Box Office India report, Hrithik Roshan and Saif Ali Khan starrer Vikram Vedha is expected to start well on its first day at the box office, “The advance of Vikram Vedha has started well with good sales on the first day. It is not at the level of Brahmastra but that is expected but there does seem a better tone to the market than those disaster days of early August. The advance of the Vikram Vedha after the first 24 hours is the best for original Hindi content after Brahmastra post pandemic but it has continue like this till Thursday.”