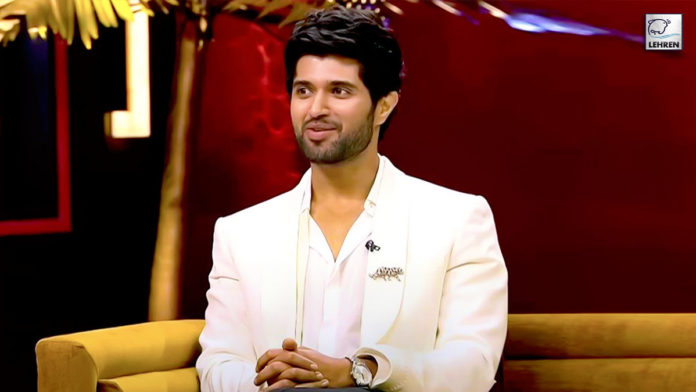 Vijay Deverakonda and Rashmika Mandanna have been in the headlines amid dating rumours. The Arjun Reddy actor featured in the new episode of Koffee with Karan 7 with Ananya Panday. On the couch sipping coffee he brewed some interesting conversation. Vijay Deverkonda also spilled some beans on his relationship status.

Vijay and Rashmika have been paired together in two films namely Dear Comrade and Geetha Govindam. They both maintained that they are good friends yet media reports speculated them as a couple. Earlier, they rumoured to be dating each other and this got highlighted again when Sara Alia hinted at the couple when she visited Koffee with Karan 7.

Vijay reacted to the reports and announced that he shares good friend bond with the Pushpa actor. He said, “We have done two films together at a really early stage in my life. She is a darling and I am really fond of her. We are really good friends. We share so much through films, lots of highs and lows. A bond gets created.”

The Liger star Vijay Deverakonda then disclosed his relationship status which he always chose to keep a secret. He said, “I will say it out loud; until then I would not like to hurt anyone who adores me. So many people love you as an actor and have your poster on their walls, on their phones. They give me so much love and appreciation; I don’t want to break their hearts.” Here Koffee with Karan host Kjo got irritated and said, “why can’t you own up things,” to this Vijay softly replied, “I’m owning it. This is my way of owning it I guess.”

On the work front, Vijay Deverakonda is busy promoting his pan-India film Liger. The film also stars young talent Ananya Panday as the female lead. The action thriller sports drama marks Vijay’s Bollywood debut. The film is directed by Puri Jagannadh and produced by Karan Johar under Dharma Productions banners. It is scheduled for theatrical release on 25th August.