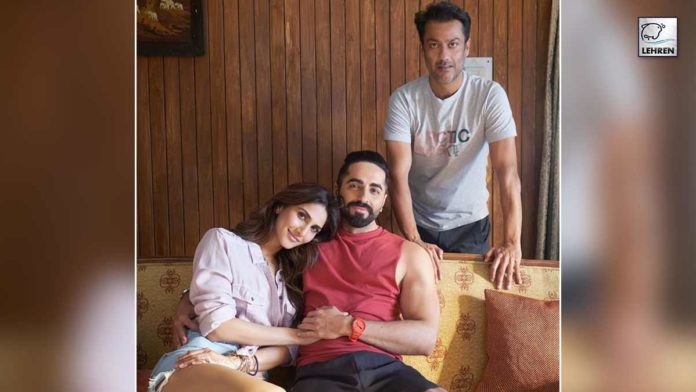 Actor Ayushamann Khurrana and his co-star Vaani Kapoor are currently in Chandigarh busy shooting for Abhishek Kapoor’s upcoming venture. The film titled Chandigarh Kare Aashiqui is a progressive love story produced by Bhushan Kumar and Pragya Kapoor. Hearsay suggests that Vaani is all set to play a very interesting role in the movie. Breaking through the glass-ceiling, Vaani Kapoor will reportedly play the role of a transgender opposite Ayushmann in the film.

However, there has been no official announcement about the same. But the sources state that Vaani Kapoor is indeed stretching the gender dynamics in the film.

Speaking of Ayushmann Khurrana, the versatile actor will play a never seen before in the movie.

Ayushmann Khurrana famous for nailing any role with perfection will reportedly play the role of a lover boy in the movie.

It will be interesting to see Vaani Kapoor play the role of a transgender and her chemistry with Ayushmann. Because it will be for the first time Bollywood experimenting with this type of love story.

A while back, taking to her Instagram handle, Vaani shared a glimpse from the sets of Chandigarh Kare Aashiqui.

In one of the pictures she posted, the Befikre actress is seen along with Ayushmann Khurrana. The director of the film Abhishek Kapoor is also there.

The other picture was of the clap, it has Shot No. 1 and Take No. 1 written on it alongside the film’s title Chandigarh Kare Aashiqui.

Vaani Kapoor and Ayushmann Khurrana will first time share the screen space and indeed it will be a beautiful experience.

On the work front, Vaani Kapoor will star opposite Akshay Kumar in the much-awaited Bell Bottom. A few weeks back the 32-year old returned to India after wrapping up the shoot for the film in Scotland.

On the other hand, Ayushmann has a handful of ventures in his kitty. He has an alleged cameo in Badhai Ho 2, Chhoti Si Baat Remake, and many more.