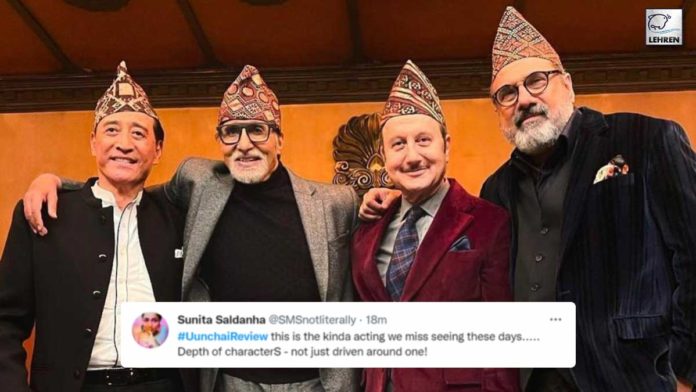 Netizens have turned in their reviews and reactions to Sooraj Barjatya's family drama film Uunchai, here's all that they have to say-

Uunchai Review: Sooraj Barjatya’s directorial Uunchai starring Amitabh Bachchan, Boman Irani, and Anupam Kher is now out in the theatres. Uunchai was released alongside Samantha Ruth Prabhu’s film Yashoda. Hours after the release the netizens have now turned in their first reviews and reactions on Uunchai, here’s all that they have to say-

Sharing their reviews a user tweeted, “Uunchai is a well-made film.The emotions are relatable and the journey is motivating. You can’t help but smile through the narrative and root for d characters to reach d Everest Base Camp. It’s a heart-warming watch.”

Another user tweeted, “Happy ? very happy the movie has shaped up !!! felt emotions through out the movie and watching #sooraj barjatya movie is an ethereal experience #UunchaiReview #Uunchai five stars”