Urmila Matondkar Strikes At Kangana Ranaut For Her Controversial Remarks 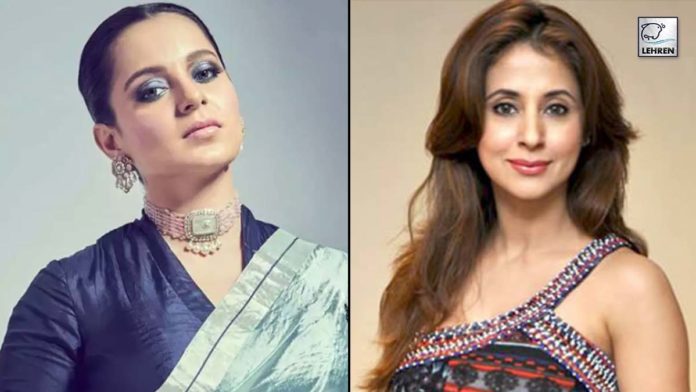 Actress Kangana Ranaut has been hitting the headlines for the past couple of weeks. Ever since the untimely demise of actor Sushant Singh Rajput, the actress has been voicing her opinions on the same. However, her recent controversial remarks on Mumbai Police and the city dragged her into a whirlwind of debates. She even made comments on the alleged drug usage in the Bollywood industry, landing herself into hot soup. In the recent update, Urmila Matondkar strikes at Kangana for her controversial remarks.

Matondkar advised Kangana to start fighting for the drug menace in her home town first. The 46-year old actress stated that Himachal Pradesh is the origin of drugs and maybe Kangana shall focus on it.

Ahead in the conversation, Urmila took a subtle dig at Kangana for getting ‘Y’ level security. She even questioned the Queen actress that why didn’t she inform the cops about the alleged drug menace prevailing in the Bollywood industry.

Furthermore in the conversation, Urmila Matondkar strikes at Kangana for her sharp remarks about Mumbai. The Satya actress asserted that Ranaut has insulted the city and the people living there.

The Rangeela actress quoted, “As a daughter of the city, I will never tolerate any defamatory remark against it. If one person shouts all the time, doesn’t mean the person is speaking the truth. Some people want to crib all the time and play the victim card and if all that fails, they play the woman card.”

For the unknown, recently Kangana Ranaut and Shiv Sena got involved in a verbal spat. The arguments began when the actress compared Mumbai with PoK.

Kangana Ranaut even received a lot of threats following her controversial defamatory remark.

Yash Narvekar: Everytime Working With Akasa Is Honestly A Treat