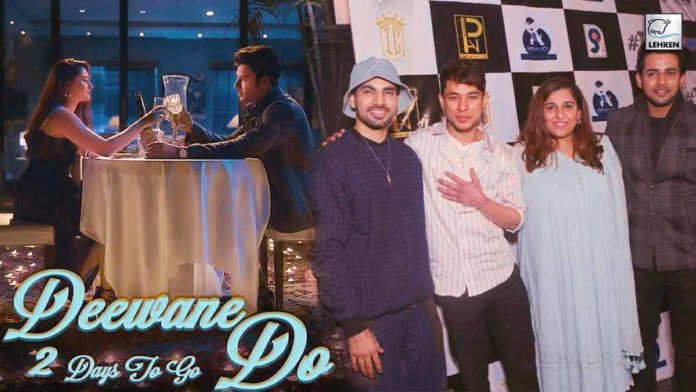 The song's launch was attended by the team of Snow Records, and Bigg Boss 15's first-runner up, Pratik Sehajpal.

Ahead of Valentine’s Day, music label, “Snow Records” has surprised the audience with yet-another heart-tugging song, titled, “Deewane Do”. Snow Records is driven to give chance to new talents and has introduced Sasha Shetty and singer Saurabh Sharma, alongside the popular face, Vikram Singh Chauhan.

“Deewane Do” is a soothing number and Saurabh Sharma’s voice accurately denotes the love and the melancholy of the lovers in this music video. While Vikram impresses with his beautiful expressions, Sasha’s ballet dance is a sight to behold.

Giving some insights about the song, Atmika Tiwari, producer of Snow Records shared, “Our new song, “Deewane Do” release on February 2. The female lead is Sasha Shetty. She is a ballet dancer and has done an amazing job. Our male lead is Vikram Singh Chauhan. It was so nice of him that he immediately said ‘yes’ when we called him to do the song. I am certain that this song will directly touch the hearts of the audience and really looking forward to everyone’s reaction to “Deewane Do”.”

Talking about the song, Vikram Singh Chauhan said, “I was very happy to be a part of this song. Firstly, when I got this song on WhatsApp by Snow Records, I heard it and I travelled to a different space. This is more like a Sufi song and I am a romantic person in life. I love such songs. I was very happy to know that Snow Records wanted me to be a part of this. It’s an emotional journey of the person in this song and it’s beautifully shot.”

The music of “Deewane Do” is produced by Gaurav Dev, Kartik Dev and it’s been directed by Manish Shunty. Lyrics, composition, and vocals are given by Saurabh Sharma whereas the song has been produced by Atmika Tiwari, Tarun Bainsla, and Sanjog Tiwari.

“Deewane Do” was launched on Wednesday, February 2 on Snow Records’ YouTube channel and will stream on various music streaming platforms too. The song’s launch was attended by the team of Snow Records, Vikram, Sasha, Saurabh, and one of the most trending celebrities in the country right now, the “Bigg Boss 15’s” first-runner up, Pratik Sehajpal.