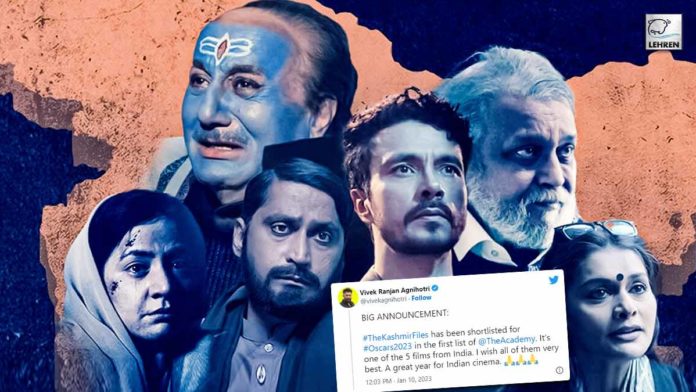 Vivek Agnihotri announced that his film "The Kashmir Files" has been shortlisted for Oscars 2023.

Bollywood movie The Kashmir Files has been shortlisted for Oscars 2023. Filmmaker Vivek Agnihotri took to his Twitter this morning and made the big announcement. He tweeted, “Big Announcement: #TheKashmirFiles has been shortlisted for #Oscars2023 in the first list [email protected] It’s one of the 5 films from India. I wish all of them very best. A great year for Indian cinema.”

In another tweet, he revealed that the lead actors of the film- Pallavi Joshi, Mithun Chakraborty, Anupam Kher and Darshan Kumaar, all of them have been shortlisted for best actor categories.

This year, 5 Indian films have qualified for Oscar nominations. This includes RRR, Kantara, The Kashmir Files, Gangubai Kathiawadi and Rocketry: The Nambi Effect. While these films are eligible for the nominations, it doesn’t guarantee or endure a nomination. It is a step towards going to the Oscars. The next process involves Oscar members to cast a vote to push the films through to the main nominations.

Talking about The Kashmir Files, it was released in March 2022 and took the box office by storm. The controversial film is based on true events. It showcases the horrifying exodus and mass killing of Kashmiri Pandits in their homeland in 1990.