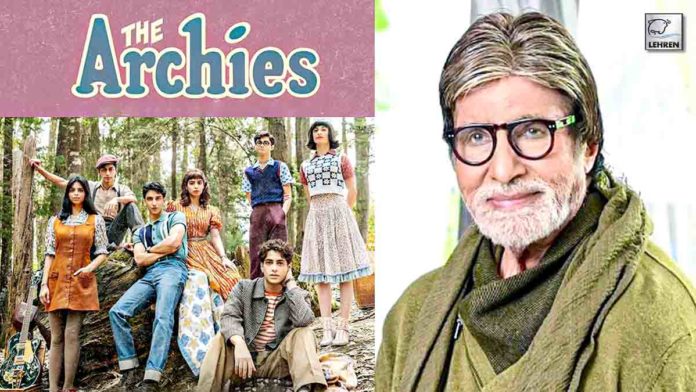 Zoya Akhtar drops the first teaser from the film "The Archies". Amitabh Bachchan extends support for grandson Agastya Nanda, see what he has to say.

The much-awaited multi-starrer film Archies marking the debut of Suhana Khan, Khushi Kapoor, and Agastya Nanda has recently dropped its first teaser of the film. The producer Zoya Akhtar recently took to her Instagram and posted a glimpse of the movie, Captioning the video she wrote, “Ain’t nothing like old school.. Grab your gang ’cause the Archies are coming soon on @netflix_in !”.

She also shared the poster of the film as she wrote, “Get ready to take a trip down memory lane ’cause The Archies is coming soon only on @netflix_in”.

While extending support to the actors, Bollywood megastar Amitabh Bachchan and Agastya Nanda’s Grandfather, shared the teaser and wrote, “…. another SONrise .. my GrandSON ..
all the blessings Agastya .. love you “.

This feature film will star the Bollywood star kids Suhana Khan, Khushi Kapoor, and Agastya Nanda. According to the reports, Agastya will be seen playing the role of Archie Andrews, while Khushi Kapoor and Suhana Khan will be seen playing the role of Betty Cooper and Veronica Lodge. Along with them the newcomer Vedang Raina is touted to play Archie’s best friend, Jughead. The trio was spotted on the film’s set in March for a costume trial.