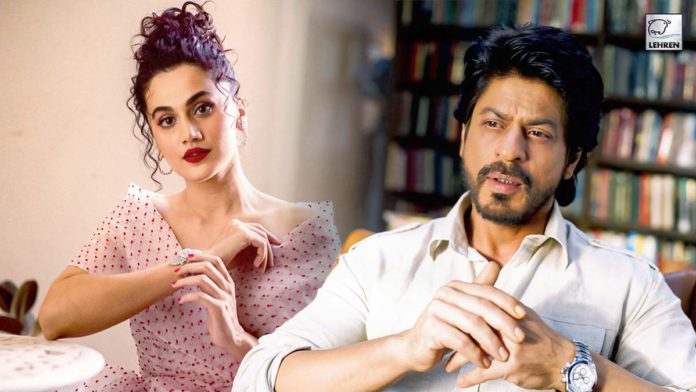 Taapsee Pannu is one of the popular actresses in the film industry. She has become a household name with her content-driven films and heroic roles. Taapsee Pannu who is gearing up for her upcoming movie Shabaash Mithu is extremely excited for the first time to share the screen with Shah Rukh Khan. She has now opened up about working with the megastar of Bollywood.

The Haseen Dilruba actress is on cloud nine after bagging a role alongside King Khan The two actors have been roped together by Rajkumar Hirani for the film Dunki. The film’s first collaboration of the director, Shah Rukh Khan, and Taapsee Pannu. The Baadshah of Bollywood has done several films with various directors but never acted for director Rajkumar Hirani. He has worked with Taapsee on Badla as the movie has been produced by Red Chillies Entertainment but never shared screen space.

The Saand Ki Aankh actress is quite excited to play a leading role in Rajkumar Hirani’s directorial Dunki with SRK. She told PTI: “When you end up getting the opportunity to work with him, it becomes the golden opportunity. And combined with the fact that it is going to be directed by Rajkumar Hirani, whose films are classics, it doesn’t get better. I don’t know how will I even ever up it.”

She added: “I feel so happy that this has happened purely on the basis of credentials and talent. Nobody picked up the phone for a recommendation. I got the film only because someone liked I what did. I have to pinch myself every day to believe that this is happening. I have grown up watching his (SRK) films. For me, Shah Rukh Khan is the introduction to Hindi films. So just standing next to him in a frame is surreal. I just hope I don’t mess it up.”

Dunki slated to release on December 22 2023 is co-produced by Red Chillies Entertainment, Jio Studios, and Rajkumar Hirani Films. Taapsee has Dobaaraa, Blurr, and Woh Ladki Hai Kahaan apart from Dunki and the forthcoming movie Shabaash Mithu that will release on 15th July. On the other hand, SRK has Jawan and Pathaan along with Dunki in the pipeline.