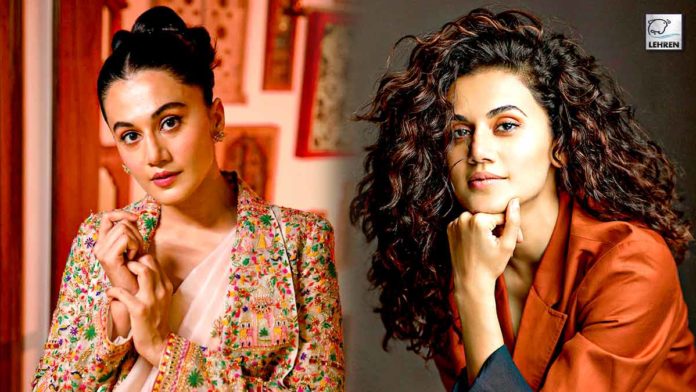 Like other actors who have made big in Bollywood coming from the South, Taapse Paanu also took a major decision in her career. She shifted to the Hindi film industry after serving 12 movies down in the south. Coming to B-town she played the various memorable character and mostly filmed female-oriented movies. Taapsee Pannu recalled her debut movie when she worked with Rishi Kapoor in Chashme Baddoor.

In a recent interview, the Pink star revealed that she was told to start afresh when she made her transition from South to Hindi. She made her Bollywood debut in 2013 with Chashme Baddoor featuring Ali Zafar, Siddharth, Divyendu Sharma, and late actor Rishi Kapoor. The talented actress received recognition and fame among Hindi viewers and in Bollywood.

Taapsee Pannu shared an anecdote when legendary Rishi Kapoor had called her a veteran. When she told her South filmography, the versatile actor was surprised and shocked. She said, “I remember on the sets of Chashme Badoor, Rishi Kapoor sir asked me once, ‘So how many films have you done in the South?’ I said 10 and I am working on the 11th one. And by the time Chashme Badoor was released, I had 12 South films out. And he was like, ‘Arre tu to veteran hai!’ So he was shocked to know that I had done this much work.”

So far Pannu has completed nine years in the industry playing phenomenal roles in films like Pink, Badla, Naam Shabana, Game Over, Mulk, Saand Ki Aankh, and Loop Lapeta among others. Recalling her journey from South to Bollywood, Taapsee said, “When I came to Bollywood nine years ago, when Chashme Badoor was released, I was told that you have to literally wipe off the fact that you are from the South because people will start looking at you like a South Indian actress. I was like, ‘Yaar maine itni mehnat kari hai vahape, why is it not looked at as an asset?’ I’d done some credible work, and on top of that, I’d worked with some really good and credible names there.”

Taapsee Pannu has recently essayed the role of Indian Women’s national cricket team captain Mithali Raj in the biographical film Shabaash Mithu. The film directed by Srijit Mukherjee was released on 15th July 2022. She will be next sharing screen space with Badshah of Bollywood Shah Rukh Khan in Raj Kumar Hirani’s Dunki.