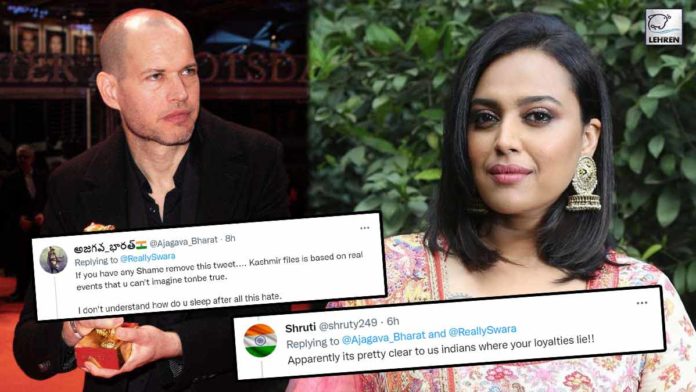 Swara Bhasker has now come out to support Nadav Lapid's statement on "The Kashmir Files" reacting to the same a segment of netizens has now slammed the actress.

IFFI Jury’s head Nadav Lapid recently passed a statement on Vivek Agnihotri’s film The Kashmir Files which has sparked extreme outrage among the celebs in the Bollywood industry. However, Tanu Weds Manu actress Swara Bhasker has a different take than other celebs. The actress recently shared a tweet supporting Nadav Lapid’s controversial statement. Reacting to the same a segment of netizens have now slammed Swara for supporting Nadav Lapid.

Another user tweeted, “Hey Swara it’s Indian Movie and Indians have given #KashmiriFiles the #Hit Stamp in the process leaving you and the likes of lapid far far away.”

Taking a dig at Swara another user tweeted, “This woman commenting about KASHMIR FILES and jumping in to join the bandwagon is like Tej Pratap Yadav negatively commenting about Theory Of Relativity. I think you should stick to prancing in curtains and deliver pizzas in NY.”

On the other hand, many celebrities from the Indian film industry have slammed IFFI Jury’s head Nadav Lapid for his statement against Vivek Agnihotri’s film “The Kashmir Files”. Anupam Kher, Pallavi Joshi, Ashoke Pandit, Ranvir Shorey, and many other celebs have shared their response on Twitter and have demanded an official apology from IFFI Jury’s head.

During the closing ceremony, IFFI jury head Nadav Lapid spoke on the behalf of the jury and said, “There were 15 films in the international competition. Fourteen out of them had cinematic qualities…and evoked vivid discussions. We were, all of us, disturbed and shocked by the 15th film, The Kashmir Files. That felt to us like a propaganda, vulgar movie, inappropriate for an artistic competitive section of such a prestigious film festival.”