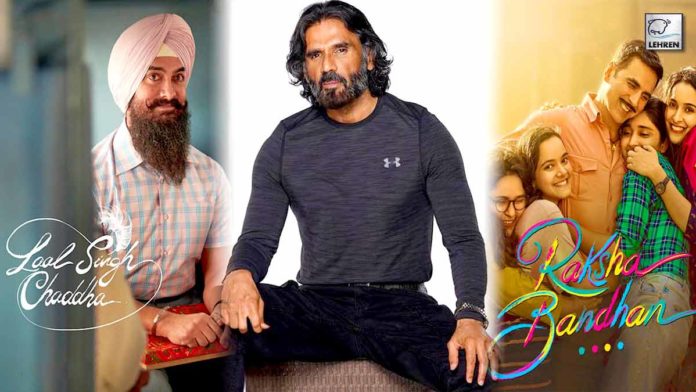 The hashtags Boycott Laal Singh Chaddha and Boycott Raksha Bandhan have been trending on social media for a few days. Twitter has become a platform to sabotage a film or actor without any cause. Right before the release, almost every film fell prey to the boycott trend or the cancel culture. After Aamir, Kareena, Akshay, and Bhumi Pednekar reacted to this popular trend Suniel Shetty stood in support of these actors for their films. He calls the boycott trend unfair as actors work hard for the film.

Suniel Shetty said about the boycott trend: “We all work hard. We all aim to do well; our intentions are good. Aamir Khan’s intentions have always been good. He is somebody who could have chosen five films a year, but he decided to do one film in five years, and I think we need to respect that. As far as Akshay Kumar goes, there is a continuous effort of wanting to do something and deliver entertaining films. We are entertainers, and we go by public choice also.”

He added: “I hate this ‘boycott Bollywood’ campaign that is going on on Twitter. I always pray it stops because we are an industry too and there are a lot of people feeding off us. So for that sake let’s not destroy an industry that has its own legacy of good people and people who probably at some stage make mistakes. But aren’t we humans too? Give one that opportunity. I only say it’s not fair. We can only pray that better sense prevails and this doesn’t happen and these two films work big time.”

Raksha Bandhan talks about the social is of dowry. Akshay Kumar and Bhumi Pednekar is a family entertainer directed by Aanand L Rai and produced under the banners of Zee Studios, Colour Yellow Production, and Cape of Good Films.

Both films were released today on 11th August 2022.