Suhana Khan Celebrates Her Birthday On Sets Of Her Debut Film ‘The Archies’, See Pics 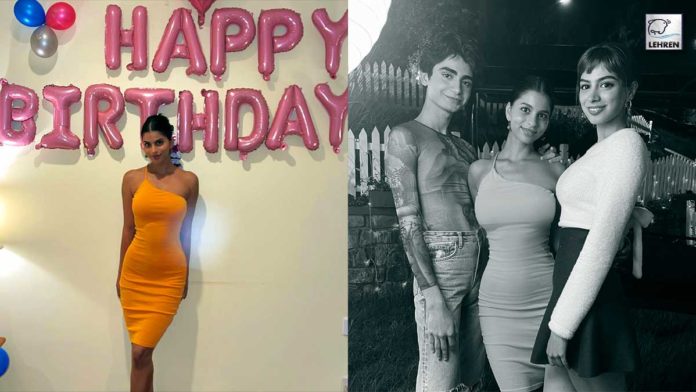 Here's a sneak peek into Suhana Khan's 22nd birthday celebrations in Ooty on the sets of her film 'The Archies'.

‘The Archies’ actress and Shahrukh Khan’s daughter Suhana Khan recently turned 22, as she shared a glimpse of her birthday celebrations which she apparently celebrated on the sets of her upcoming debut film ‘Archies’. –

Earlier the day, Suhana shared photos on her Instagram stories of a two-tire chocolate cake. The Archies actress further posted a picture of her room’s ceiling filled with balloons. While in the pictures shared on Tuesday the actress gave a sneak peek at the inside birthday party celebrations in Ooty on the sets of her film ‘The Archies’. In one of the stills, Suhana could be seen sitting at a table with Amitabh Bachchan’s grandson Agastya Nanda. While in another photo, Khushi Kapoor and Yuvraj Menda could be seen posing with Suhana at her birthday party. Khushi Kapoor wore a white sweater with a black skirt in the photo. While the birthday girl Suhana wore a one-shoulder orange bodycon dress on her special day.

Earlier, the actress loads of appreciation after the teaser from her upcoming film ‘The Archies’ was released by filmmaker Zoya Akhtar. On her achievement, her father and Bollywood megastar Shahrukh Khan penned a long note for her.”And remember @suhanakhan2 you are never going to be perfect. But being yourself is the closest to that. Be kind and giving as an actor. the brickbats and applause is not yours to keep.the part of you that gets left behind on screen will always belong to you.u have come a long way baby.but the road to peoples heart is unending..stride forth and make as many smile as you can. Now let there be Light.Camera and Action! Signed Another Actor”.

On the work front, Suhana will be seen making her Bollywood debut with Zoya Akhtar’s ‘The Archies’, a Hindi adaptation of a popular comic with the same name. The film also stars Amitabh Bachchan’s grandson Agastya Nanda and Janhvi Kapoor’s sister Khushi Kapoor. The film will release on Netflix in 2023.