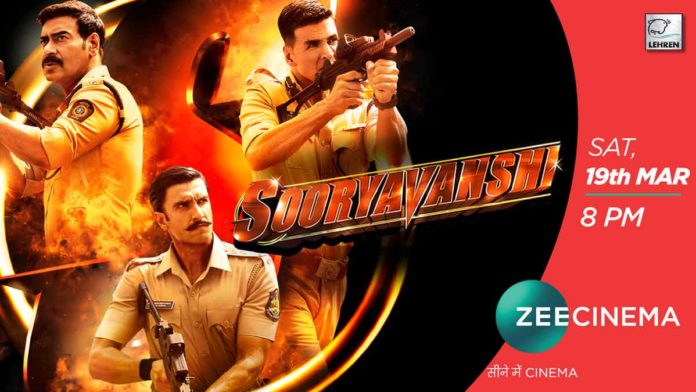 This Holi, people around the nation have geared up to join the celebration of the biggest premiere of the year Sooryavanshi only on Zee Cinema on 19th March at 8 pm.

Food is an important part of any celebration- a common factor that brings everyone together. Similarly, the news of the grandest television event of the year- World Television Premiere of the blockbuster “Sooryavanshi” on 19th March at 8 pm on Zee Cinema, saw people across India celebrate “Sooryavanshi” mania with each city transforming their popular dish into “Sooryavanshi” specials with a unique taste blended in the local milieu. As the celebration hit our Aamchi Mumbai, it was transformed into a ground of merriment. With Mumbai’s popular ‘Parle Vada Pav Samrat’ joining the celebration, a tailor-made experience for the Mumbaikars awaits with a masaledar twist to their favourite Vada Pav.

The beloved food stall extended their enthusiasm to celebrate the Sooryavanshi fervour for all their guests by transforming their famous Vada Pav into a “Sooryavanshi” special. Incorporating teen ka power with “Sooryavanshi”, “Singham”, Simmba into the dish, the food stall leaves no stone unturned to create a taste for “Sooryavanshi” for the city that never sleeps. Many such popular food stalls across India joined Zee Cinema in the biggest celebration of the year by presenting a special dish for their city. Embracing the very, many qualities of Rohit Shetty’s mighty cops, the visitors of the stalls are offered free taste to this “Sooryavanshi” special delicacies during this on-ground celebration.

Directed by India’s designated action entertainer Rohit Shetty, “Sooryavanshi” manifests all the elements of a mega-blockbuster film – a killer cast including megastar Akshay Kumar, the gorgeous Katrina Kaif, wittiest Simmba aka Ranveer Singh, Bajirao Singham aka Ajay Devgn followed by highly popular chartbusters such as ‘Tip Tip Barsa Paani’ and ‘Aila Re Aila’ along with slick high combat action choreography. Overall, what makes “Sooryavanshi” the greatest family entertainer of all times is the captivating plot that includes the terrific trio – Sooryavanshi, Singham and Simmba fighting together against enemies of the Nation.

Talking about his experience of shooting for the film, Akshay Kumar said, “I have done a fair share of action films throughout my career, but Sooryavanshi stands out for sure. The preparation for Veer Sooryavanshi took more than just fitness regimes and following action choreographies, I got to dig deep into the lives of real heroes and took inspiration from the IPS officer Vishwas Nangare Patilji. Rohit Shetty is known for creating larger than life, blockbuster entertainment experiences for the viewers and I feel, “Sooryavanshi” is a film that perfectly exemplifies it. All in all, I would say Sooryavanshi was an experience of a lifetime to shoot for and I hope the audiences watch and enjoy the film with their families.”