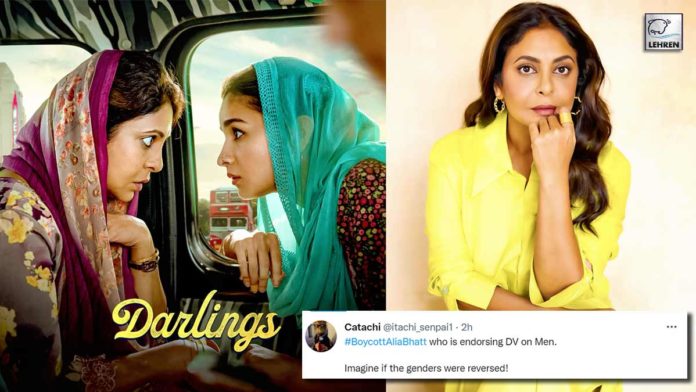 Darlings actress Shefali Shah shares her reaction to the viral Boycott Alia Bhatt trend, the latter says, "I don't want to dignify this with a comment."

Darlings: Days before the release of the film, ‘Darlings’ a boycott trend was seen trending on Twitter, in which many netizens used the hashtag #BoycottAliaBhatt, asking people to not watch her movie Darlings for promoting domestic violence against men. While in a recent interview, actress Shefali Shah opened up on the matter and said, “I don’t want to dignify this with a comment.”

Just a few days before the release netizens decided to target the Darlings actress Alia Bhatt for promoting domestic violence against men in her film Darlings. Apparently, there have been some scenes in the film where Alia Bhatt is seen torturing her on-screen husband Vijay Varma who will be seen essaying the role of Hamza Shaikh in the film Darlings.

Referring to the same Twitter users recently decided to boycott the film and the Bollywood actress Alia Bhatt. Sharing the trend a Twitter user wrote, “#BoycottAliaBhatt who is endorsing DV on Men. Imagine if the genders were reversed!”, another user wrote, “Everyone should #BoycottAliaBhatt for making a misandrist movie like Darlings. For bollywood, domestic violence on men is a matter of joke. Pathetic.”

Meanwhile, recently in an interview with  ETimes, the Darlings actress Shefali Shah who will be seen playing the role of Alia’s mother in the film, shared her reaction to the trend and said, “I don’t want to dignify this with a comment.”

Darlings is written and directed by Jasmeet Reen and co-produced by Gauri Khan, Alia Bhatt, and Gaurav Verma under the banners of Red Chillies Entertainment and Eternal Sunshine Productions. It has released on streaming giant Netflix on 5th August.