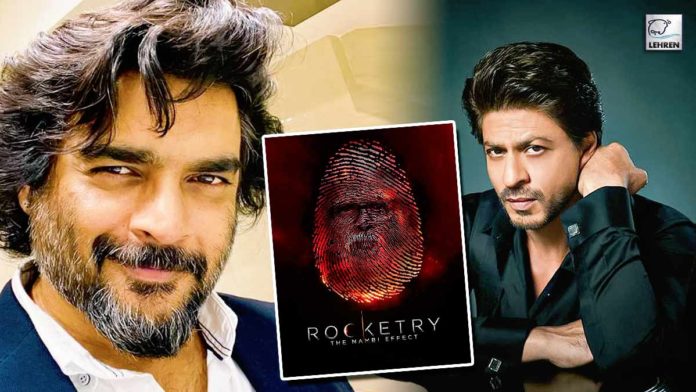 Actor R Madhavan donned the director’s hat for his debut Rocketry: The Nambi Effect with a vision to deliver the story of ISRO scientist Nambi Narayanan to millions. Shah Rukh Khan and Suriya are reported to do a cameo in the film Rocketry: The Nambi Effect. Maddy revealed how King Khan bagged the role in the biopic movie of the Indian scientist Nambi Narayanan.

During the promotions, Madhavan recalled when Shah Rukh Khan expressed his desire to be a part of “Rocketry: The Nambi effect”. The 3 idiots actor revealed that during one of Shah Rukh’s birthday party he insisted to be featured in the film they had discussed during the filming of Zero. The director of the scientific drama film then roped in Shah Rukh Khan and Suriya in the cameo role. The two big stars of Bollywood and Tamil didn’t even charge a single penny for the shoot.

R Madhavan said, as quoted by news agency ANI, “I mentioned about Rocketry to Shah Rukh Khan sahab (sir) when I worked with him in Zero …he vividly remembered it that during one of his birthday parties he asked me about the film’s status and expressed his desire to be a part of the film. ‘I’m ready to play any role in the background I want to be a part of this film’, Khan sahab told me. I thought he was joking. Two days later my wife Sarita asked me to thank Khan sahab for his kind words. I dropped a message to Khan sahab’s manager asking her to convey my gratitude to him and I instantly got a text from the manager saying, ‘Khan sir is asking about the dates of the shoot’.. and that’s how he became a part of our film.”

He also added, “The two (Shah Rukh and Suriya) did not charge a single penny for their work in the film. They did not charge anything for caravans, costumes, and assistants. In fact, Suriya flew out to shoot in Mumbai with his crew on his own money. He did not charge for the flights or for the dialogue writer who translated his lines in Tamil.”

Shah Rukh Khan will play the role of a chat show host interviewing R Madhavan aka scientist Nambi Narayan in the Hindi version of “Rocketry: The Nambi Effect”. Suriya is said to play the same role in the Tamil version of the film.

The directorial debut of actor Maddy has been shot in India, France, Canada, Georgia, and Serbia. Rocketry will be released in multiple languages including Hindi, English, Tamil, Telugu, Malayalam, and Kannada.