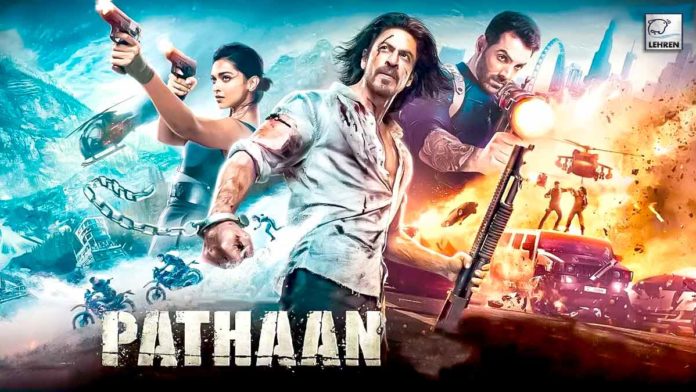 Pathaan is part of Yash Raj Films' spy universe and also sees Salman Khan as Tiger crossing over in an epic cameo.

Shah Rukh Khan’s Pathaan has set box office on fire and is on track to become the biggest opening ever for a Hindi film. As per trade analyst Taran Adarsh, the spy thriller has minted Rs. 20.35 crores till 3 pm at three national cinema chains. PVR has contributed the highest numbers with Rs. 9.40 crores and Inox has contributed Rs. 7.04 crores. Third cinema chain Cinepolis contributed with the least numbers of Rs. 3.90 crores. With this, the spy thriller has already broken War’s (2019) record which had minted Rs. 19.67 crores.

Considering the fact that War was a holiday release and Pathaan is releasing on a normal weekday, this collection is a big achievement. Since early morning people and SRK fans are flocking to theatres to see King Khan back on the big screen after his 4 years hiatus.

The film has been trending on Twitter since morning as the fans of the Pathaan who got to watch Pathaan’s first-day first show are expressing their love for their favourite star on the social media.

Siddharth Anand’s directorial which also stars Deepika Padukone and John Abraham has been receiving positive reviews from the critics as well as the audience.

After seeing Pathaan breaking all the previous box office records, it’s not too far-fetched to assume that this stylish action with swagger has a fair chance to be the biggest Hindi opener in India. The record is now held by break KGF: Chapter 2 (Hindi version) which had earned Rs. 54 crore on its opening day.