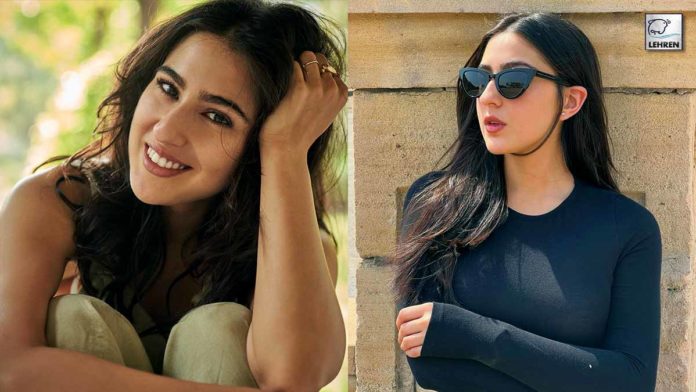 The actress has always been active on social media and once again, the ‘Atrangi Re’ actor is making headlines for her latest post. This time she brought for her fans a dance video on Tuesday in which she can be seen grooving to RD Burman’s evergreen song ‘Samundar Mein Nahake’. Sara can be seen dancing along with hairstylist Sanky Evrus on what looks like a beach with a small salt pyramid behind them. She wore a black dress and paired it with a denim jacket. She captioned the post, “Namak mein Chamak, Thumak Thumak,”.

Reacting to her post, Celebrity stylist Tanya Ghavri commented, “I can’ttttttt sara ali khannnnnnnnnnn why can’t you be controlleddddd @saraalikhan95.” Several fans took to the comment section of Sara Ali Khan’s post and appreciated her dancing skills. While one of the fans wrote ‘Superb’, another social media user called her ‘Çutie’. The comment section of Sara’s post is flooded with fire and heart emojis.

From the clip, it appears that the actor is shooting in Gujarat for her upcoming film ‘Gaslight’, in which the actor will be seen opposite actor Vikrant Massey. Earlier this month, Sara Ali Khan and Vikrant Massey were spotted visiting Devbhumi Dwarka Temple while shooting for their upcoming film ‘Gaslight’ in Gujarat. Soon after which she posted a picture on her Instagram from her temple visit.

The actress also often posts videos with her brother Ibrahim Ali Khan. Recently the actress shared a video with her brother on Sibling’s day and captioned it as “Happy Sibling’s Day Watch us laugh, sing and play I know I’m annoying by the way But as Iggy Potter knows- that’s here to stay.”

On the work front, the actress will next be seen in Laxman Utekar’s untitled film with Vicky Kaushal. She also has ‘Gaslight’ with Vikrant Massey and Aanand L Rai’s ‘Nakhrewali’.

Also Read: Palak Tiwari Finally Reveals Why She Hid Her Face On Her Date With Ibrahim Ali Khan!